The Feast of Booths or Tabernacles

This seven-day feast took place during the seventh month of the Jewish calendar (our September to October). This third and final feast for the year had as its purpose to remember the wilderness wandering. Also called the feast of ingathering (Exodus 23:16; 34:22), it was a time for the people to express their joy for the completion of the harvests—which included their fruit trees, grain, and grapes.

The Hebrew term sukkahrefers to a temporary, fragile booth or shelter in which the Israelites lived when God brought them out of their slavery in Egypt (Leviticus 23:42-43). As they moved from place to place, they would build these portable mini-homes that gave them temporary shelter in the desert. After their arrival in the Promised Land, every year, God wanted the Israelites to be reminded of this fact by constructing booths in which to live for an entire week. Jews today who celebrate this feast often build a shelter in their backyard to remind them of the Israelites’ Exodus from Egypt, and the traveling hardships they endured. 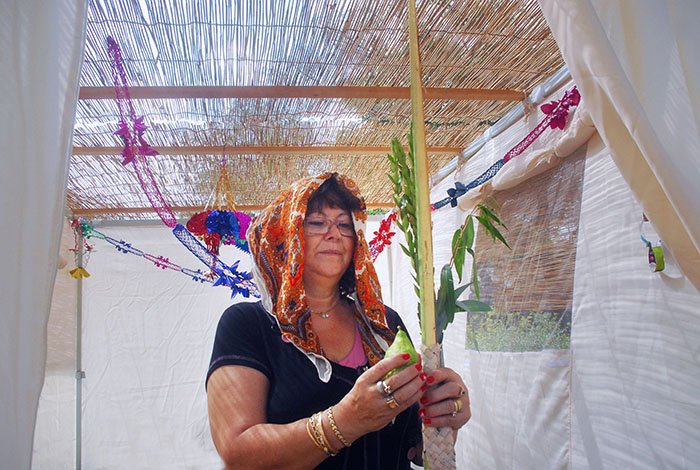 God also wanted the Israelites to include four special items: “And you shall take for yourselves on the first day the fruit of beautiful trees, branches of palm trees, the boughs of leafy trees, and willows of the brook; and you shall rejoice before the LORD your God for seven days” (Leviticus 23:40). So today, Jews take a piece of fruit (to symbolize the fruit of the Promised Land), called an etrog (similar to a lemon), as well as a palm branch lulav that is wrapped with myrtle and willow branches. Once the Temple was built in Jerusalem, pilgrims would hold their lulavs and make a circular procession around the altar in the Temple courtyard. They would cry out to God the word hoshea-na (“Please save!”). We say “hosanna.”

This fascinating feast looked forward to the day when the Son of God Himself approached Jerusalem sitting on a colt (suggesting royal honor). He was met by a crowd of excited worshippers (as a direct fulfillment of the kingly prophecy of Zechariah 9:9). Guess what they did. They waved the branches of palm trees, and some shouted: “Hosanna! Blessed is He who comes in the name of the Lord!” What an incredible scene! In a joyous, triumphant setting similar to the Feast of Tabernacles, with palm waving and littering the pathway, a group of people offered a heartfelt cry to God to bring salvation.