The Fall of Tyre

Like Sidon, its “mother” city twenty-five miles to the north (Isaiah 23:12), Tyre straddled both island and mainland. Although barren and rocky, the offshore portion occupied a seemingly impregnable position, and may have supported as many as forty thousand inhabitants (Pfeiffer, 1966, p. 591). A small bay on the northern end of the island formed one of the best natural harbors along this stretch of the Mediterranean coast. Most important, the city stood at the crossroads of a worldwide trading network stretching from Europe to the Far East, and from Asia Minor to Egypt. Home-grown products included glassware and a fine purple cloth (which was favored by royalty and dyed with an extract of the local Murex marine snail).

Tyre began its rise to prominence with the plundering of Sidon by Philistines around 1200 B.C. The influx of refugees and the temporary loss of competition spurred a period of great growth. Dealers and shipping merchants grew fabulously rich (Isaiah 23:8). They used their wealth to create a “stronghold of Tyre” (2 Samuel 24:7; see also Joshua 19:29), and bought peace by paying hefty tributes to whatever superpower was in control at the time.

Hiram I of Tyre (c. 979-945 B.C.) ushered in a “golden age” by uniting the Phoenician city-states under one rule, building temples to the deities of Melqart and Astarte, constructing a breakwater to create a harbor on the southern side, and connecting the two ports with a canal. In between periods of foreign influence, Tyre continued to expand its economic reach, including the founding of Carthage in 814 B.C.

This growth coincided with the reigns of Israel’s most powerful kings, David and Solomon, so it is not surprising that we should find considerable contact between these neighbors. After all, little more than a hundred miles separated Tyre from Jerusalem. (Facts like these are hard to keep in mind, given the larger-than-life significance of the events played out in this tiny corner of the world.) In fact, the Phoenician port crops up frequently in biblical history, poetry, and prophecy. David relied on Tyre’s resources for the building of his royal palace in Jerusalem (2 Samuel 5:11). Solomon went further, drawing on its materials and skilled workmen for the construction of the great temple in exchange for territory (1 Kings 9:11), and on their seafaring prowess for the founding of a fleet at the Red Sea port of Ezion-Geber (1 Kings 9:27). It is to Tyre that the repatriated exiles turned for the rebuilding of Jerusalem under the grant of Cyrus (Ezra 3:7). Of all the rulers, Ahab went the farthest by establishing a political alliance with Tyre. This he confirmed by a marriage to Jezebel, daughter of Ethbaal (1 Kings 16:31), Tyre’s ruler/high priest who had overthrown King Phelles. As biblical history makes quite clear, this unholy compact had disastrous consequences for Samaria (1 Kings 13:31-33).

Of all the prophets, the book of Ezekiel devotes the most attention to Tyre (chapters 26-28). The revelation begins by citing the city’s notorious opportunism as one reason for its ultimate demise (26:2-3). As noted previously, Tyrian merchants had much to lose by an interruption of regular commerce, and could afford to buy peace with their enemies. Frequently, these treaties brought the city-state into alliance with other nations against Israel (Psalm 83). Despite the mutual respect that existed in the time of Hiram, the king’s successors took advantage of God’s people in their moments of weakness (Joel 3:4-6; Amos 1:9). Of course, divine condemnation would come on all nations, including Tyre, that acted against the people of God (Jeremiah 25:14-29). One of Tyre’s rulers also claimed to be a god, and this individual’s transgression constituted a further indictment against the city (Ezekiel 28:2).

What is most notable about Ezekiel’s prophecy is the accuracy of its fulfillment. Although secular records are not sufficiently complete to provide an independent confirmation of every detail, chapter 26 makes at least seven definite predictions that can be tested against historical data (see table below).

In their book, Science Speaks, Peter W. Stoner and Robert C. Newman attempt to attach some real-world, but conservative, probabilities to each of these seven predictions (1976, pp. 72-79). If, for a moment, we assume that Ezekiel made some guesses about Tyre’s fate, what would be the chance that he could get, not just one partially correct, but all correct in every detail? That chance turns out to be 1 in 75,000,000. To give a practical analogy, an individual is twice as likely to be killed on the ground by an airplane during his or her lifetime, than to make these seven predictions and have them all come true. Or, to take a less morbid approach, this probability would be on the same order as flipping a coin and getting heads 26 times in a row (“26” may not seem a big number, but just try it some time!). Truly, the divine judgment of Tyre, and the accuracy of Ezekiel’s prophecy, provide a great demonstration of God’s presence in human affairs. 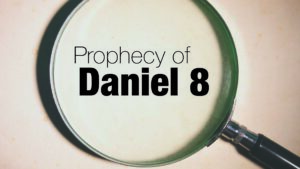 The Prophecy of Daniel 8