The Ermine: A Protector of Purity

There is a little furry creature about the size of a squirrel that lives in very cold climates. It is often called a stoat or weasel. But in the winter, in places where there is a lot of snow, this critter sheds its brown fur and grows a beautiful coat of pure white. When it does this, people refer to the creature as the ermine. Through the years, ermine fur has been prized for its clean, white color as well as its smooth softness. How did hunters catch ermines to get their fur? As the story is told, hunters would find the ermine’s den when it was not inside and smear the outside with disgusting mud or filth. They would then turn their dogs loose to find the ermine. After a long chase, the ermine would finally run back to its home, only to discover that the entrance was covered in grime. Because the ermine valued its beautiful white coat so much, it would not go through the entrance and get its fur dirty. Instead, it would give itself up to the hunters so that its coat would not get spoiled. That is why the ermine became a symbol of purity. It would rather die than get dirty. 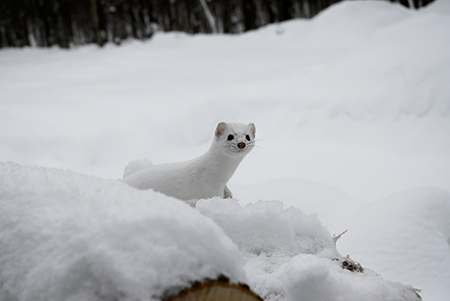 What does that have to do with us? As people who follow Christ, there are things in our lives that are very important that we must protect, even if it costs us our lives. The early Christians were persecuted and captured by the Roman government. The government told them that if they would not worship the idols of Rome, then they would be killed. The Christians were told to deny that Jesus is the Son of God. What do you think many of them did? Instead of “getting dirty” by lying and saying Jesus is not God’s Son, they boldly declared their faith in Him and were killed. Like the ermine, they would rather die than soil their soul with sin. We should be willing to do the same. In Revelation 2:10, Jesus said, “Be faithful until death, and I will give you the crown of life.” Jesus promises to reward all those who protect their purity.