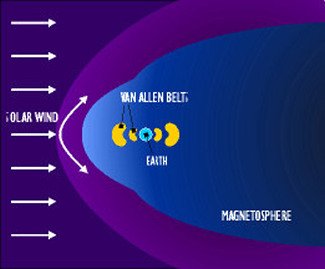 As the solar wind approaches Earth, it is forced away by our planet’s magnetic field. The protected region of space is called the magnetosphere. On the night side (i.e., the side facing away from the Sun), the force of the solar wind stretches the magnetic field for millions of miles. Some of the radiation still leaks in, though, and helps form the Van Allen belts.

As the Earth moves around the Sun, it is blasted by solar radiation. This could be very harmful to living things. But the Earth has a magnetic field, which deflects much of that radiation.

The region around our planet that is affected by the Earth’s magnetic field and solar radiation is called the magnetosphere. It has two doughnut-shaped regions (known as the Van Allen belts) that actually trap radiation. Some of this radiation leaks down near the poles where the magnetic field is the weakest, and lights up the sky with colorful curtains of light called aurora.

Like regular magnets, the Earth’s magnetic field has north and south poles. Humans can use a compass to show which way is north. Some animals have a built-in compass that helps them navigate across long distances.

What amazing design God has built into the spaceship we call “Earth”! 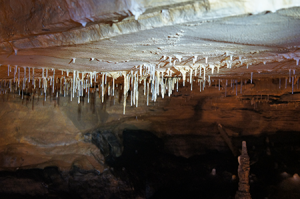