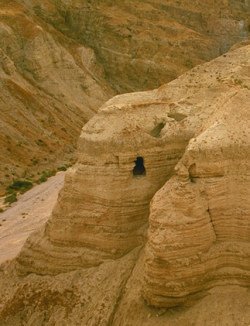 In the middle of the picture you can see an opening to one of the caves where the Dead Sea Scrolls were found.

About 50 years ago, an Arab boy was watching a little herd of goats in the rugged wilderness west of the Dead Sea (in Palestine). One of the goats wandered away, and young Muhammed went looking for it. While resting, he tossed a rock into a nearby cave. He was shocked when he heard a hollow “clink” sound. When he later entered the cave, he discovered several large pottery jugs. In two of these jars were leather scrolls (a rolled-up writing material) containing a strange writing.

This boy did not realize that he had made one of the greatest discoveries in modern times. He had found a portion of that famous collection of ancient writings known as the “Dead Sea Scrolls.”

One of the scrolls in this collection contains the Old Testament book of Isaiah. The manuscript, when unrolled, was 24 feet long and 10 inches high. It was made of 17 leather sheets sewed end-to-end. The scientists who studied the scroll said that it probably was copied about two hundred years before Christ was born.

One of the great values of this discovery is this: It showed that the text of the Bible had been copied faithfully (there were no printing presses in those days), with very little change, for hundreds of years. This helps us to have a confidence in the fact that when we read our Bibles today, we can be sure that we are looking at the same message that God gave so many years ago.