Archaeology Inspiration of the Bible Science and Faith
From Issue: Discovery 8/1/2018

Cyrus was the king of the Medo-Persian Empire in 540 B.C. He was one of the most important foreign rulers of the Israelite nation. In fact, many Old Testament prophecies talk about him. The prophet Isaiah foretold that Babylon would fall to the Medes and the Persians (Isaiah 13; 21:1-10). Not only did Isaiah explain that Babylon would fall, but he also stated that Cyrus was the king who would defeat it (Isaiah 44:28; 45:1-5). Amazingly, Isaiah’s prophecy was made about 150 years before Cyrus was born. We know this because Isaiah prophesied in about 700 B.C. and Cyrus took the city of Babylon in 539 B.C. Isaiah also predicted that Cyrus would act as the Lord’s “shepherd.” In fact, Isaiah recorded these words of the Lord concerning Cyrus: “And he shall perform all My pleasure, even saying to Jerusalem, ‘You shall be built,’ and to the temple, ‘Your foundation shall be laid’” (Isaiah 44:28).

In 1879, an archaeologist named Hormoz Rasam found a small clay cylinder (about nine inches long) in the ancient city of Babylon. (This cylinder is now in the British Museum). Upon the clay cylinder, King Cyrus wrote about his victory over the

city of Babylon and his policy toward the nations he had captured. He also detailed his policy toward their various gods and religions. Cyrus explained that he sent back all the idols to the various nations. He also wrote that he rebuilt their temples. His decree that is written on the cylinder matches perfectly what the Bible predicted he would do. Cyrus decreed that the temple in Jerusalem should be rebuilt and all the exiled Israelites who wished to return had his permission and blessing to do so (Ezra 1:1-11). This little nine-inch clay cylinder is strong evidence that the Bible is 100% accurate and inspired by God. 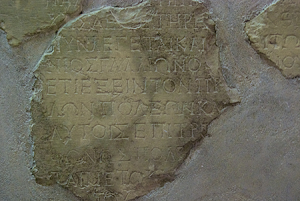