Of all the significant questions pertaining to human existence, none is more crucial than whether the God of the Bible exists. If He does exist, all human beings are obligated to come to a knowledge of His will and render obedience to Him. Those who fail to do so will face eternal punishment 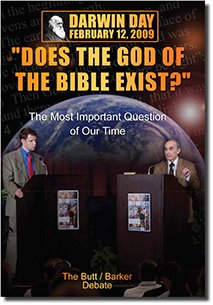 (2 Corinthians 5:10-11). If, on the other hand, the God of the Bible does not exist, behavior remains a matter of subjective, human inclination. Yet, the massive assault on traditional American values over the last half-century has taken its toll. Many Christians have been bullied into thinking that, perhaps, the theistic viewpoint cannot be given a credible, articulate defense in the face of the brash, overbearing onslaughts of atheism. But Jesus said: “You shall know the truth, and the truth shall make you free” (John 8:32).

On Thursday evening, February 12, 2009, over 500 people pressed into the Russell House Ballroom on the campus of the University of South Carolina in Columbia to witness the verbal exchange between Dan Barker, avowed atheist, and A.P. staff member Kyle Butt, Christian theist. Reports of 250 additional people were turned away due to fire code regulations. Being in the Affirmative, Dan Barker had the responsibility to present proof that the God of the Bible does not exist. The format of the debate consisted of two 15-minute speeches, followed by two 10-minute speeches, followed by two five-minute cross-examinations in which the debaters posed questions to each other. A 40-minute period ensued in which questions from the audience were directed in alternating fashion to each debater.

The debate was streamed live over the Internet to an audience estimated to have been in the thousands. After this initial effort to make the debate available to a wider audience, work on the production of a high-quality video of the debate quickly followed. That project has now been completed. We are pleased to announce the release of The Butt-Barker Debate on DVD. The approximate running time of the DVD of the debate is two hours, and is packaged in traditional DVD packaging, a sturdy plastic case with professional artwork. You will most certainly want to view this debate, and make copies available to friends, family, and co-workers who need to view it as well. We can know that the God of the Bible exists!