The Blue Whale is No Fluke of Evolution 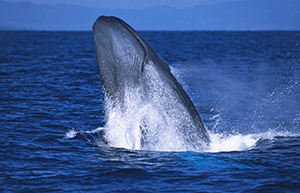 There is big—and then there is the blue whale. Elephants are big, but they aren’t “blue whale big.” Even though Argentinosaurus—the largest dinosaur man has ever discovered—was huge (an estimated 100 tons or 200,000 pounds), it still was only about half the size of the largest known blue whale.

Blue whales are born big and then become enormous. Baby blue whales are almost 25 feet long at birth and weigh as much as a small pick-up truck (6,000 pounds). The calf feeds on her mother’s rich milk and gains a whopping 200 pounds every day during the first year of her life. By the time the baby becomes a full-grown whale, she can reach 100 feet in length and weigh nearly 200 tons or 400,000 pounds. 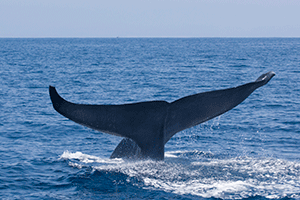 Blue whales have a fluke (tail) used to propel them forward under water. This fluke is wider than a racquetball court. Their tongue is so large that 50 people can stand on it at one time. Their heart is the size of a small car, and they have blood vessels large enough for small fish to swim through. (Not that fish do; that’s just how large these whales’ blood vessels are.) The blue whale’s largest blood vessel (called the aorta) is so large that a small person could actually crawl through it.

Can you believe that evolutionists claim that blue whales evolved from land animals? Supposedly a small, fox-like creature began eating fish and started living more and more of its life in the water. Over millions of years, allegedly, this animal’s front legs became flippers, its back legs all but disappeared, its tail became a fluke, and it began living full-time in the oceans. Where is the proof for such a story? Actually, there is no proof—there is only evolutionists’ interpretation of various fossils they have found in the ground. The fact is, no one has ever proved (or will ever prove) that the blue whale’s great-great-great…granddaddy was a fox-like, land animal.

Whereas humans and most land animals could survive for only a few minutes in the frigid waters that marine mammals call home, God designed whales perfectly for life in the sea. The blue whale is able to withstand bitterly cold water temperatures, because of the tens of thousands of pounds of blubber in its body. This blubber, which is made up mostly of fat, functions as insulation, helping keep the whale from freezing to death in chilly waters. What’s more, when krill (shrimp-like creatures that whales feed on) are scarce, blue whales can live off of the energy stored in their blubber. 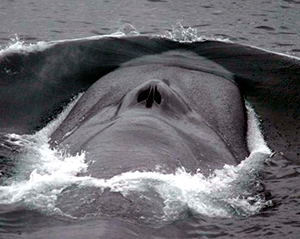 Does it really make sense to believe that a fox-like, land animal evolved into a whale over millions of years? How did it evolve the many specialized features of whales, such as the capability to withstand freezing cold temperatures? How did its nose move to the top of its head and become a blowhole? How did the mother whale (called a cow) evolve the necessary ability to pump her rich milk into the mouth of her baby (called a calf), rather than simply allow the calf to suck in the milk as land mammals do? (If calves had to try to suck 200 pounds of milk a day, they would likely suck in a lot of water and die.) How did the supposed fox-like ancestor of whales evolve the ability to endure the extreme water pressure that whales feel when they dive hundreds or thousands of feet below the surface? Such pressure would kill most animals.

Neither the blue whale nor any other whale evolved these incredible, specialized features. No fox-like creature fathered these amazing animals. God designed these wonderful whales to live in water. The Bible says that on the fifth day of Creation, “God created great sea creatures and every living thing that moves, with which the water abounded, according to their kind” (Genesis 1:21). 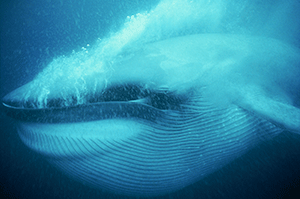 A bluewhale feeding, with pouch inflated