The Bible and Prophecy

Fulfillment of prophecy Inspiration of the Bible
From Issue: Discovery – November 2020

On Tuesday, September 11, 2001, a horrible tragedy shocked the United States when terrorists attacked the World Trade Center and the Pentagon. Amidst the tragedy, a rumor circulated that Nostradamus, a supposed fortuneteller who lived about 500 years ago, had predicted the events. Websites with information on Nostradamus received millions of hits. After all was said and done, the rumors had been false. But it was obvious from the public’s response that anyone who can accurately predict the future is more than just a little special. The prophet Jeremiah wrote: “Who is he who speaks, and it comes to pass, when the Lord has not commanded it?” Lamentations 3:37 The prophet’s point was clear: nobody perfectly and consistently foretells minute details of the future unless God informs him of it. Therefore, if the Bible accurately predicts the future, we can know that it is from God. When we look to the Bible for evidence of predictive prophecy, we find it in abundance.

The Fall of Tyre

In Ezekiel 26:1-14, the Bible foretold the destruction of the city of Tyre. In 586 B.C., the prophet Ezekiel predicted that:

History records that each one of these predictions came true. Tyre was a coastal city that had a somewhat unusual arrangement. In addition to the city
on the mainland, there was an island city about three-fourth’s of a mile offshore. Nebuchadnezzar besieged the mainland city in 586 B.C., but when he finally was able to take the city in about 573 B.C., his victory was hollow. He did not know that the people of Tyre had left the city and moved to the island. Then, in 332 B.C., Alexander the Great conquered the city—but not with ease. To get to the island, he literally had his army “scrape clean” the inland city of all building timbers, stones, and dirt. He then dumped those materials into the ocean, thereby building a “land bridge” to the island, accomplishing exactly what Ezekiel predicted. The prophet Ezekiel looked hundreds of years into the future and predicted that the city of Tyre would be a bald rock where fishermen gathered to open their nets. And that is exactly what history records.

Babylon was one of the richest cities in the world during the years 740 to 680 B.C. Babylon gained its reputation because of its high, massive walls and its strong defenses. In fact, ancient writers described its walls that were 14 miles long on all four sides of the city and that reached heights of over 300 feet—taller than most buildings today. Not only were the walls long and high, but in some places they also were 75 feet thick.  But the wall was definitely not the only form of defense. The Euphrates River surrounded the city, making a perfect moat that ranged anywhere from 65 to 250 feet across. This wall/moat combination appeared to make the city unconquerable. Yet in spite of the strong military and defensive strength of the city, God’s prophets foretold its destruction. In Jeremiah 50:9, the prophet declared that God would “raise and cause to come up against Babylon an assembly of great nations from the north country.”

This prediction probably seemed unfounded at the time it was made, because none of the countries in the north came close to having enough strength to defeat Babylon. But years after the prophecy, Cyrus, king of the Medo-Persian Empire, gathered a huge force of many different nations and marched southward against Babylon.

The details of the fulfillment are amazing. Jeremiah recorded that God had declared:

The Euphrates River ran underneath the great walls of Babylon. After a siege of two full years, Cyrus was able to divert the river to make it flow into a huge marsh on the western side of the city. By doing this, he “dried up the rivers” of Babylon and provided an easy way for his soldiers to enter under the city walls where the water used to flow. Still, the Babylonians could have defended the city, but instead they were feasting and getting drunk. Cyrus ordered his men to act like drunken party goers, and by the time the Babylonians knew what had hit them, the city was filled with enemy troops who ultimately conquered it.

Imagine taking a trip to Philadelphia, Pennsylvania, and visiting the State House where the Constitutional Convention took place in 1787. During the tour, your guide points to a document dating back to 1820. The piece of parchment tells of a man named Donald Trump from New York, who would be President of the United States within the next 200 years. But how could someone know that a man named Donald Trump would be born in the United States? And how could someone know more than a century before Mr. Trump was ever born that he would be President of the United States? Such a prophecy truly would be amazing! Yet, obviously no such prediction was made.

So how did the Bible writers predict that Cyrus would overthrow Babylon, release the Jews from captivity, and assist them in their return to Jerusalem for the purpose of rebuilding the Temple? All of this was written almost two
hundred years before Cyrus conquered Babylon in 539 B.C. Amazing! In case you’re wondering about the factuality of this story, secular history verifies that all of these events came true. There really was a man named Cyrus who ruled the Medo-Persian Empire. He did conquer Babylon. And just as Isaiah prophesied, he assisted the Jews in their return to Jerusalem and in the rebuilding of the Temple. Time after time, the Bible has been “dead on” when it has predicted the future. Historical records document the facts about Tyre, Babylon, and Cyrus.
No one but God can tell the future and be right about it every time. When others try, they fail. The Bible explains how important being able to tell the future is:

“When the word of the prophet comes to pass, the prophet will be known as one whom the Lord has truly sent” (Jeremiah 28:9).

If someone or something (such as a book) can predict the future and be right 100% of the time, then that person or book was sent directly from God. And because that is the case, every human being should welcome the Bible 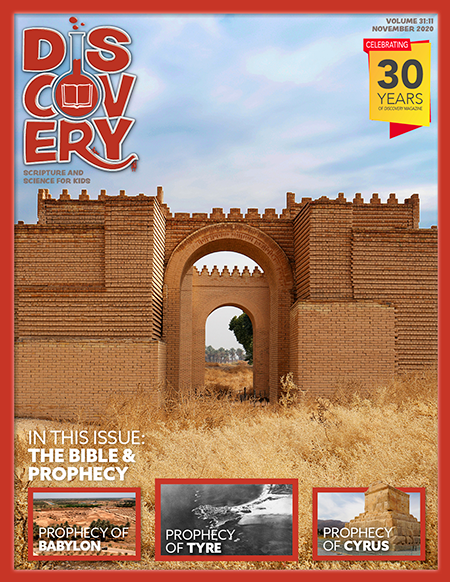 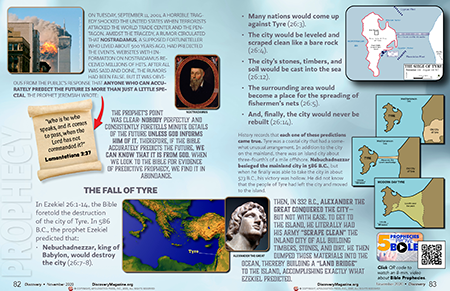 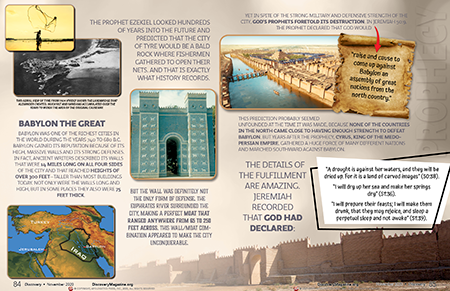 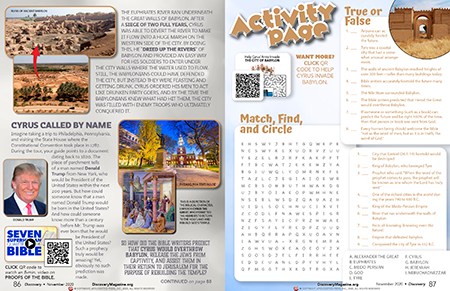 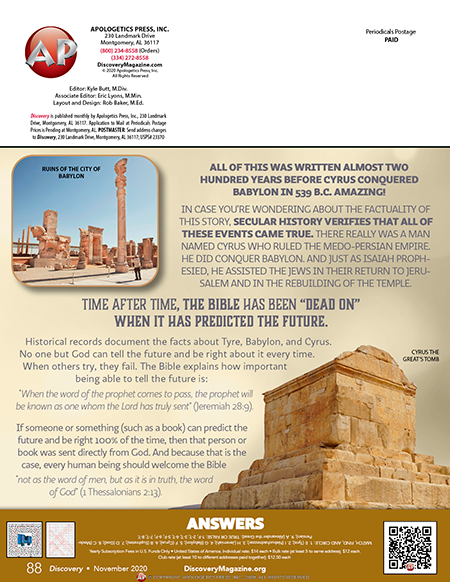 The Book of Isaiah

The Book of Jeremiah