If God does not exist and the Bible is not His inspired Word, human life is meaningless. We are merely the result of a cosmic accident. We ultimately are nothing more than evolved matter that will merely return to dust.

In a 1994 debate at Stanford University on Darwinism, atheistic evolutionist William Provine summarized his views on modern evolutionary biology and its “loud and clear” implications. According to Dr. Provine, “There are no gods, no purposes, and no goal-directed forces of any kind. There is no life after death. When I die, I am absolutely certain that I am going to be dead. That’s the end of me. There is no ultimate foundation for ethics, no ultimate meaning in life…” (Provine and Johnson, 1994).

Whereas atheistic evolution implies that human life is rather pointless, the biblical explanation for man’s God-given purpose is deeply rooted in his origins, as well as his afterlife. After having already acknowledged that from a purely naturalistic perspective life is meaningless (Ecclesiastes 1:2; 12:8), the wise man concluded that the ultimate purpose of human life is to “fear God and keep His commandments” (12:13). Of particular interest is the fact that this all-important conclusion is grounded in (1) where we came from and (2) where we are going (12:1,7,14).

The inspired penman of Ecclesiastes concluded that “man’s all” is to “fear God and keep His commandments” because “God will bring every work into judgment” (12:13,14). Though most agree with the obvious truth that “it is appointed for men to die once,” many reject the fact that when this earthly life has ended judgment awaits (Hebrews 9:27). God has “appointed a day on which He will judge the world in righteousness by the Man Whom He has ordained” (Acts 17:31)—the Son of God, to Whom the Father “has committed all judgment” (John 5:22).

One of the main themes of the New Testament is that Jesus, the Judge, will return. The first recorded message after Jesus’ death, resurrection, and ascension into heaven was: “This same Jesus, who was taken up from you into heaven, will so come in like manner as you saw Him go into heaven” (Acts 1:11). Though Jesus will “be revealed from heaven with His mighty angels, in flaming fire taking vengeance on those who do not know God, and on those who do not obey the gospel of our Lord Jesus Christ” (2 Thessalonians 1:7-8), Christians can rejoice in the fact that “the Lord Himself will descend from heaven…. And the dead in Christ will rise first. Then we who are alive and remain shall be caught up together with them in the clouds to meet the Lord in the air. And thus we shall always be with the Lord” (1 Thessalonians 4:16-17).

Faithful Christians can (and should) look forward to the end of time and the promise of Jesus’ return. “For our citizenship is in heaven, from which we also eagerly wait for the Savior the Lord Jesus Christ” (Philippians 3:20). “To those who eagerly wait for Him He will appear a second time, apart from sin, for salvation” (Hebrews 9:28).

The same Word of God that Christians trust regarding our bright future, is the same Divine Word that details our beautiful beginning. Peter recognized that “long ago by God’s word the heavens existed and the earth was formed out of water and by water…. By the same word the present heavens and earth are reserved for fire, being kept for the day of judgment and destruction of ungodly men…. Nevertheless we, according to His promise, look for new heavens and a new earth in which righteousness dwells” (2 Peter 3:5,7,13, NIV, emp. added).

The same Lord Who “made the heavens…shall judge the world” (Psalm 96:5,13, emp. added). The Christ Who created “all things…that are in heaven and that are on earth” (Colossians 1:16), is the same Jesus Who will return “in His glory, and all the holy angels with Him” (Matthew 25:31). Our beginning and ending are inextricably linked by God and His Word.

How is it that some put so much trust in what God has revealed about the end of time, yet care so little about the details He gave regarding the beginning? God certainly could have created the Universe in any way He desired, in whatever order He wanted, and in whatever time frame He chose. He could have created the world and everything in it in six seconds or six billion years. But the pertinent question is not what could God have done; it is what He said He did. And He said that He created everything in six days (Genesis 1). When God gave the Israelites the Ten Commandments, He stated: “Six days you shall labor and do all your work…. For in six days the Lord made the heavens and the earth, the sea, and all that is in them, and rested the seventh day” (Exodus 20:9,11).

What has the all-authoritative, eternal Creator revealed to us about His Creation in His all-authoritative Word? In contradiction to what theistic evolutionists teach about, for example, humanity finally evolving 13-14 billion years after the commencement of Creation, Jesus indicated that “from the beginning of the creation, God made them male and female” (Mark 10:6).

Sadly, some individuals choose to believe in man-made, convoluted, imaginative theories, rather than fully embrace God-revealed, inerrant, biblical truth. Faithful servants of God, however, put complete confidence in the Creator’s all-authoritative Word, respectfully and consistently relying on His guidance about both the beginning and the end. “Remember now your Creator,” for “the dust will return to the earth as it was,” but “the spirit will return to God who gave it” (Ecclesiastes 12:1,7). 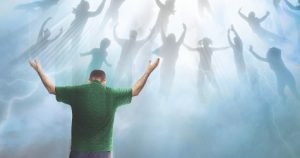