When most people hear the word “snake,” they quickly become unnerved. Snakes’ waggling, forked tongue, beady eyes, and slithering bodies generally disturb people. And although most snakes are not venomous, the fact that some of them are leads many people to avoid them all together. The truth is, however, snakes are superb examples of design in the animal kingdom.

Evolutionists claim that snakes evolved from lizard-like ancestors that lost their legs over the course of millions of years. However, no real proof exists for this far-fetched theory. The fact is, snakes, with their long, skinny, legless bodies, are perfectly designed to move efficiently on all sorts of surfaces. They can climb up trees, in trees, and down trees. They can slither underground or aboveground and over hard rock or loose sand. Some snakes, such as anacondas (the largest snakes in the world), are excellent swimmers. Other snakes, like flying tree snakes, can effectively jump and glide from one tree to another or from the tree to the ground. The movement of snakes is a marvelous thing to witness. They clearly have been designed with a powerful, complex muscular system, which is perfectly attached to hundreds of bones—all of which allow snakes to bend, curl, twist, and turn in all sorts of ways and on all kinds of terrain.

Have you ever seen a night vision camera with specially designed sensors that are built to detect heat? Soldiers often use this technology (called infrared) when they need to move around in the dark while keeping a close eye on the enemy. What these soldiers actually see with infrared equipment is the heat of various objects, including humans and animals.

Amazingly, some snakes have built-in, heat-sensitive pits that are located on the top of their mouths, just below their nostrils. With these, snakes are able to sense the presence of both prey and predators. These pits are not merely empty holes in their heads. They are actually complex organs packed with nerve endings that snakes use to accurately detect the direction and distance of other animals. Question: If no one would ever claim that infrared cameras are the result of the non-intelligent, random processes of evolution, why would anyone say that the superb heat sensors of snakes are merely the product of evolution?

Some snakes have fangs from which they inject a poison called venom. Venomous snakes, such as the King Cobra, produce the poison in small sacs behind their eyes. When these snakes bite their prey, venom is released through their hollow teeth. This action is similar to the way a doctor uses a needle to inject medicine into a patient.

If no one thinks that a doctor’s needle is the product of evolution, why would anyone think that evolution could explain a snake’s “natural needles”? God designed both their fangs and their venom production abilities. 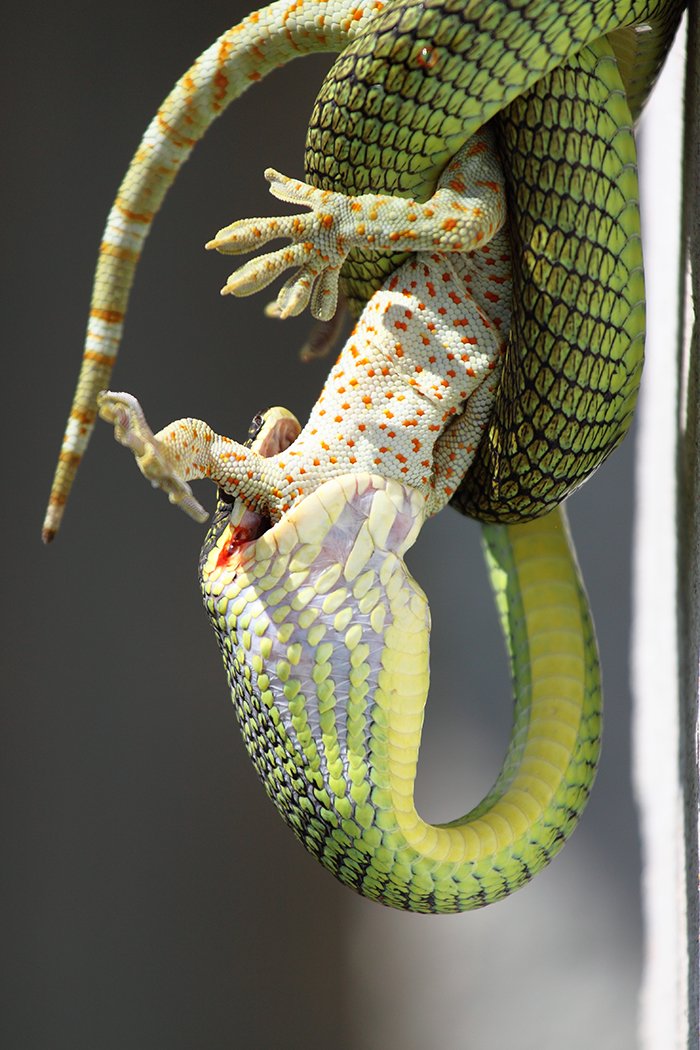 Plastic Man, Mr. Fantastic, and all other stretchy superheroes are the inventions of creative imaginations. Snakes, on the other hand, are the real deal when it comes to elasticity.

It is difficult for humans to swallow anything much bigger than a quarter, yet some snakes (like African Rock Pythons) can stretch their jaws and swallow prey as big as a 130-pound deer—horns, hooves, and all. How can a snake swallow prey so much bigger than its own head? If left up to evolution, one would think that the first time a snake tried consuming such a large animal he would choke to death. The truth is, God designed snakes with very stretchy ligaments that allow them to separate their jaws and open their mouths extremely wide.

“God made…everything that creeps on the ground” (Genesis 1:25).

A snake’s scales, sensors, fangs, elastic ligaments, and versatile movements testify to something greater than “millions of years of evolution.” These wonders of design demand a Designer; they declare His glory.