Every month for 32 years, Discovery magazine has been mailed to children all across the United States. During these three decades, we have studied all sorts of things—from evolution to electricity, from Adam and Eve to the resurrection of Jesus. We have also looked closely at hundreds of different animals and seen their unique, God-given designs. Surprisingly, one animal that we’ve never highlighted in 32 years of Discovery is one that many of you have likely seen thousands of times scampering around on the ground or going up and down trees. Can you guess what it is? Probably so. The squirrel!

[How can it be that three of our favorite cartoon characters of all time are Rocky (from Rocky and Bullwinkle), Hammy (from Over the Hedge), and Scrat (from the Ice Age movies), and yet we’ve never highlighted squirrels in Discovery!?]

Like many kinds of animals, there is great variety among “squirrels.” Squirrels are categorized by scientists in the Sciuridae (see-YOO-ri-dee) Family under the Order of Rodentia. (That’s right. Squirrels are actually classified as a type of rodent.) More than 250 varieties of squirrels are considered part of the Sciuridae Family. These squirrels include ground squirrels, tree squirrels, and flying squirrels, as well as chipmunks, marmots, and prairie dogs. The size of some full-grown squirrels, such as the African pygmy squirrel, is only three inches long and a few ounces in weight. On the other hand, Asia’s red giant flying squirrel can reach lengths up to 21 inches (not including its tail) and a weight of over six pounds.

Can “flying” squirrels really “fly”? No, not like birds and bats can. “Flying” squirrels, however, do glide—boy, do they glide! God designed them with their own “wingsuits” that they use to glide from limb to limb and tree to tree. (At times, they look like they are floating.) Flying squirrels have a soft fold of skin called a patagium (pa-TAY-jee-um), which connects and stretches from their wrists to their ankles on both sides of their body. This perfectly designed furry membrane allows flying squirrels like the red giant to glide up to 500 feet—nearly two football fields! (Some contend they have seen these wonders of God’s creation glide even farther.) Flying squirrels glide from high in a tree to lower parts in the same tree or different trees. 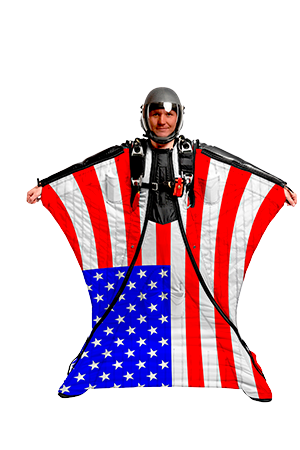 For thousands of years, people have wanted to fly. We have looked to the natural world around us (especially birds) for inspiration and have built all sorts of flying machines—from airplanes to powered parachutes. Some have become even more daring in recent years and made expensive wingsuits to glide hundreds or thousands of feet in the air. What could their inspiration have been for these well-designed gliding suits? No doubt, one of their favorite, superbly designed creatures to imitate has been the flying squirrel. Interestingly (and sadly), many human beings have made daring wingsuit flights and have suffered major injuries and even death upon landing. Yet, flying squirrels are so well designed that they can make such “flights” many thousands of times throughout their lives…and land without ever suffering major injury. How could anyone logically conclude that perfectly designed gliding squirrels are the result of evolutionary time and chance, while the man-made, imperfect copies are the result of highly intelligent designers? Such reasoning is quite illogical and very disrespectful to God, the Grand Designer of all things. 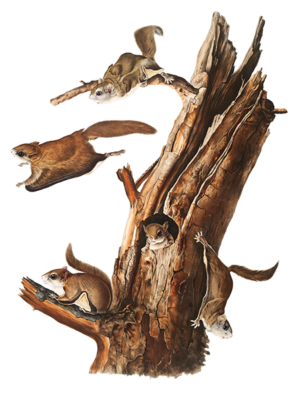 Just because most squirrels are not “flying squirrels” with a parachute-like patagium does not mean they are any less well-designed. Ground and tree squirrels are quite amazing creatures in their own right. You have heard the comparative phrase “as quick as a cat.” perhaps a better phrase would be “as quick (or swift) as a squirrel.” Their quickness and reflex abilities are astonishing. They seem to be able to “turn on a dime” as they are scampering full speed. One split second they are running one direction. Then a nanosecond later, they have turned in the complete opposite direction. Many times you will see squirrels zigzagging at superhero-type speeds in order to escape predators. (Imagine having a squirrel on your football or basketball team.) 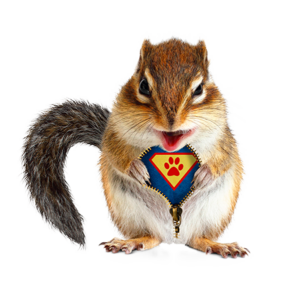 In addition to their quickness, consider the acrobat-like balance, nimbleness, and coordination of these cute creatures. Human acrobats train thousands of hours for years to be able to walk a tightrope or to swing confidently from a trapeze to a trapeze while 50 feet in the air. Yet squirrels have these abilities (and many more!) from the time they leave their mother’s nest at about 10-12 weeks old. With their perfectly designed feet and claws, tree squirrels can zoom up and down a tree trunk at a 90-degree angle without fear of falling. They can go round and round the tree trunk at super speeds. (Imagine how dizzy that would make us.) Even “non-flying” squirrels can jump from branch to branch (even flimsy branches) and from tree to tree with seemingly little concern for the 30 or 40 feet below them. Tree squirrels’ balance and agility are truly mesmerizing. (People have even set up obstacle courses for squirrels just to witness how crafty and coordinated these creatures are.) 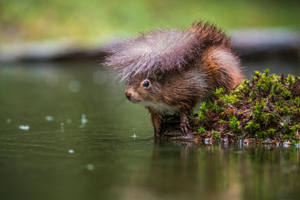 Like many other animals, one reason for the brilliant balance of squirrels is because of the tails that God designed for them. Interestingly, the word squirrel comes from the Greek word skiouros, meaning “shadow tail.” The name reflects how a squirrel can maneuver its tail in a way that allows the squirrel to sit in its tail’s shadow. (How cool is that! No need for a shade tree on a hot day when you have a “shadow tail.”)

No doubt you have seen (or at least heard) how squirrels gather nuts, such as acorns and pecans, and store them to eat at a later time—especially in the winter when food may be scarce. Some of these nuts are carried back to the squirrel’s nest or den. However, many thousands of these nuts are hidden in thousands of different places in the ground—over a few square acres. (One acre is a big area compared to the size of a squirrel.) 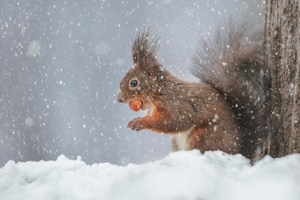 Let this nut-hiding action on the part of squirrels sink in for a minute. A squirrel’s survival is dependent upon it being able to find (literally) thousands of hidden nuts. Some of us lose just one textbook or misplace one set of keys. (How many times have you lost something this past year?) And yet, scientists have studied squirrels and concluded that they are able to uncover several thousand nuts that they had previously hidden months earlier. Some have estimated that a squirrel’s recovery rate is as high as 80%—and the other 20% is likely not because of them simply forgetting their whereabouts, but due to other legitimate factors. (Perhaps it didn’t need them and was waiting to retrieve them at a later date. Or, maybe other squirrels found them and ate them.)

Imagine being able to “hide” 10,000 objects in the ground and being able to uncover as many as 8,000 a few months later. How many times have you purposefully hidden just one object…and yet only a few days later forgot where you hid it? (As someone who often wonders where his keys are—even sometimes when I may be holding them in my hand!—I don’t want my life dependent on being able to find thousands of hidden meals for my survival.)

Yes, squirrels are amazing animals that have been on Earth since day six of Creation (Genesis 1:24-25). But as remarkable as these creatures are, let’s be sure to remember that their Creator is the Real Remarkable One! He is the grand Designer of squirrels which, like all complex, functional living things, testify to the greatness of their wonderful Creator and Sustainer of life.

“Who among all these does not know that the hand of the Lord has done this, in whose hand is the life of every living thing…?” Job 12:9-10a

“Praise the Lord from the earth…wild animals and cattle, small creatures and birds.”
Psalm 148:7,10 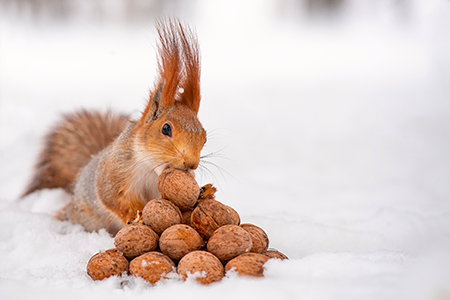