Something Can't Come from Nothing 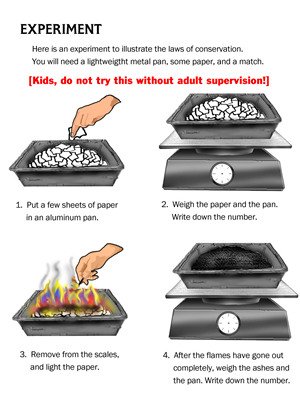 If you do the experiment shown here, you will notice that the ashes weigh less than the original wad of paper? Why? What happened to the missing mass? Did it just disappear? No, it went up in smoke, which is nothing but fine ash and gases. If we were to put a big box around our experiment, we would find that the total weight would not change, because everything would stay inside the container.

What we see here is a very important law of science: “mass neither is created nor destroyed in a chemical reaction.” The amount of mass was conserved, which means that it stayed the same, even though it changed from paper to ashes and smoke. Our experiment is an example of what scientists call the Law of Conservation of Mass.

This leads to another law: “energy neither is created nor destroyed.” Like matter, it can change from one form into another. Scientists call this the Law of Conservation of Energy.

We can combine these two laws into one: “neither matter nor energy is created or destroyed in nature.” This is one way of expressing what scientists call the First Law of Thermodynamics (‘thermo-’ is about heat, and ‘-dynamics’ is about energy). Another way is to say that something must come from something.

Now let’s compare our experiment to the different ideas about how the Universe began.

As you can see, the Big Bang has problems using nature alone. What caused the Big Bang? At least with our experiment we had a match. Where did the energy come from to make the original “stuff” (some scientists call this the “cosmic egg”) start expanding? How did all the galaxies of this huge Universe come from something that was supposed to be no bigger than the little dot at the end of this question? Most of all, where did the “cosmic egg” come from in the first place?

We do not have these problems with the Creation. The laws of conservation apply to nature, but God is outside of nature (He is supernatural). Also,

The Big Bang theory expects us to believe that something came from practically nothing. This is against what we know about the First Law of Thermodynamics. Creation by God is a better idea because it says that something (the Universe) came from something else (God).