Let’s explore the fabulous flying snake and discover how it is able to soar. First, the snake has special scales that have ridges on them. These ridges are known as keels. Using its ridged scales, a flying snake can push against the trunk of a tree and climb to high branches. In fact, flying snakes spend much of their time in trees. When the snake wants to change trees or float to the ground, it finds a suitable branch, slithers to the end of it, and launches itself off the limb. Once in the air, the flying snake sucks in its belly and flares out its sides. It then moves its body back and forth almost as if it were swimming in midair. How does this help the snake glide? By drawing the middle of its body up and spreading out its sides, the snake forms an air pocket along the underside of its stomach. You can see a similar design in a flying disc such as a Frisbee® that has a concave shape where the sides dip down further than the middle of the disc, leaving a “lip” on the underside around the edge. The slithering motion in midair also helps control air flow and helps the snake control where it lands. 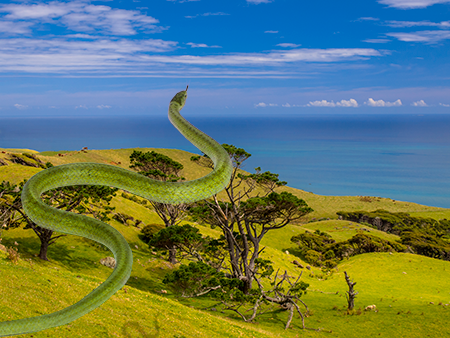 If you want to get technical, flying snakes don’t really fly, since they cannot gain altitude. Actually they are gliding snakes. It just so happens, however, that they are really, really good gliders. Even though they do not have limbs like flying squirrels do, they are more efficient than “flying mammals.” In fact, some flying snakes can glide as far as 300 feet in one jump. That is the entire length of a football field. Can you imagine seeing a snake jump from a limb in a tree near a football field goal line and then “fly” all the way to the other end zone? It is no wonder we call them flying snakes.

Because flying snakes are such good gliders, scientists have done lots of research on their abilities. These scientists are trying to find out how the snakes, with no limbs or wings, can use the air so well and go so far. If we could learn more about how flying snakes float so efficiently, we could use that knowledge to build helpful machines or gliders. Some of the researchers believe that by mimicking the snakes’ design and abilities, we could build helpful robots that glide through the air and perform useful jobs. 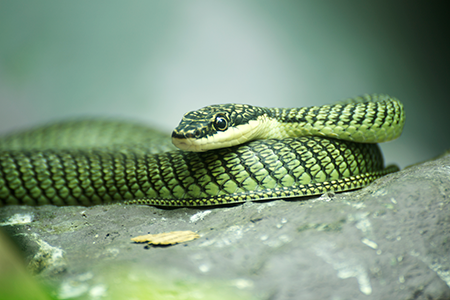 When humans look at nature and try to copy the design they see, this is called biomimicry. We often write about biomimicry in Discovery. This field of study is important for several reasons. First, humans have been able to create very useful things based on nature. Velcro® is a fabric that was created when a man looked at how cockleburs stick to fur and hair. Biomimicry is also important because it tells us something about God. You see, humans are smart. There are many things, however, that humans don’t know. We have been studying nature for many years, but we still do not completely understand animals such as the flying snake. That means that Whoever designed the flying snake is much more intelligent than all the humans in the world. We know that God is the grand Designer Who created the Universe. We can see a tiny piece of His awesome design when we study flying snakes. Let’s always remember to praise the Creator for all the super, slithery, soaring wonders He has made.