“Fed Up” With Sin 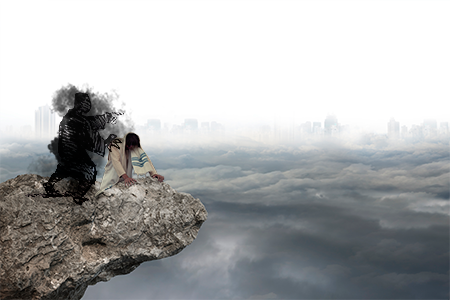 Mankind seems to have a fascination with heights. We love to build tall buildings, climb the biggest mountains, and soar to the highest heights. If you have ever looked out of the window of an airplane, then you know the thrilling rush as you look down on the world below. Sometimes, it seems to offer a sense of control. This might be similar to how the kings in history felt when they looked out from their palace walls across their kingdom. However, it is also a humbling experience to realize that wherever you are, and whatever you see, it is all created by God Who, at this very moment, is looking down on you.

Many times, people fail to consider that God owns everything, and they allow pride to take control. Oftentimes, this happens to powerful businessmen who run large companies, to politicians who make the laws, or to leaders who control the nations. But, it easily can happen to other people as well. They see something nice that they would like to own or control, and they decide to devote their lives to gaining it, rather than allowing God to provide for their needs.

The devil understands these temptations, which is why he uses pride and greed to tempt us. In the Bible there are many examples that show how Satan can use these types of temptations. One of the best examples is found in Matthew chapter four. Satan used the temptation of power and control to try to tempt Jesus. Satan took Jesus to the top of a very high mountain and began to show Him all of the kingdoms of the world, which were laid out beneath Him (vs. 8). Then, surprisingly, Satan offered to give them all to Jesus, for Him to own, control, and rule. However, like most “deals,” there were strings attached. What Satan wanted Jesus to do wasn’t physically or mentally difficult; nor did it require Jesus to pay large sums of money. What it did require, though, was Christ’s total devotion. Satan declared that he would give the entire world to Jesus, if He would only fall down and worship him (vs. 9).

Jesus was “fed up” with Satan’s attempts. Satan had tried other times to tempt Jesus into sin, and Christ was tired of it. What Jesus said, and how He said it, should be an example for how we handle temptations in our lives. Christ said, “Away with you, Satan! For it is written, ‘You shall worship the Lord your God, and Him only you shall serve’” (Matthew 5:10). Christ firmly demanded the evil tempter to get out of His sight, because of what God’s Word said.  And in the very next verse the Bible reveals that Satan left Him immediately. God’s Word helped Christ defeat the devil, and it will help us do the same.