Similar Things Do Not Prove Evolution

For more than 100 years, evolutionists have argued that similarities among living things prove that living things share a common ancestor. Because the flipper of a whale and the forefoot of a dog have certain likenesses, allegedly they share the same great-great-great…grandparents. Similarities between the wing of a bat and the forefoot of a turtle also supposedly help prove evolution. Because the DNA of chimpanzees and humans are similar about 96% of the time, evolutionists declare: we must have evolved from the same ape-like creature millions of years ago. 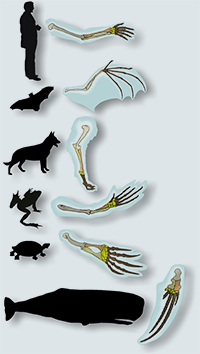 Humans and chimps both have eyes, tongues, noses, ears, feet, legs, and hair. No doubt, then, our genetic make-up is going to be very similar. But even sea sponges, which scientists once thought would have only shared one or two percent of our DNA, actually share about 70% of our DNA. And, believe it or not, the nematode worm actually shares 75% of our DNAmake-up. Yet we obviously look nothing alike.

Such similarities should actually tell us something about the Creator’s loving nature. Think about it: human life is more valuable than all other forms of life (Genesis 1:26-28; 9:1-6). But, because God created a world where man can study, kill, and experiment on genetically similar, yet non-human, life forms (sea sponges and chimps, for example), humans can actually learn more about the human body without taking the life of humans—those who are created in the image of God. Similarities do not prove a common ancestor, but show that there is a common Designer.

In short, even though you will likely read about evolutionists’ “similar-things” argument in nearly every textbook that addresses the theory of evolution, in no way does it prove their theory true. Rather, it is just another example of evolutionists’ faulty interpretation of the facts of life—facts that creationists openly embrace and logically explain.