It seems that when most people think of sharks, they picture one kind: the 20-foot-long, 3,000-pound great white shark with its powerful jaws and terrifying, sharp, serrated teeth (all 300 of them!). The fact is, however, there are many different kinds of fish that we call sharks, including angel sharks, horn sharks, bamboo sharks, and many others. Consider some of the diverse sharks that God created on day five of Creation.

The biggest of all the sharks (and the largest fish on Earth) is the whale shark. These sharks are not whales (which are classified as mammals), but they are “as big as a whale” (or at least some of them). The whale shark can reach 40-plus feet in length—longer than the average school bus—and it can weigh 24,000 pounds—or almost twice as much as Tyrannosaurus rex is thought to have weighed. 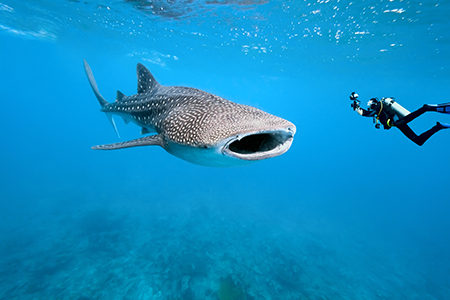 The whale shark is quite different than what you might think of as a typical shark. Whale sharks are passive giants that tolerate humans swimming near them. They occasionally even allow scuba divers in the open ocean to hang on to their fins for a free ride. (Can you imagine doing that?!)

Whale sharks do not eat by biting and chomping down on their prey. Instead, these sharks open their large mouths and suck in large amounts of small plankton and sardines, which are trapped by a spongy webbing, and then swallowed.

What is the smallest shark on Earth? It appears that honor belongs to the dwarf lanternshark, which at full-grown is about the size of a stapler (6-8 inches). Just imagine being able to hold an adult shark in one hand!

The name lanternshark comes from the fact it can produce bioluminescent (by-oh-LOO-meh-NESS-sent) light. That is, God made the lanternshark with the ability to produce light naturally with chemical reactions. Such light, which is emitted from the shark’s underside, likely helps to trick its small prey.

God gave the extinct megalodon (MEG-uh-luh-don) the largest teeth of any known shark. Its teeth grew about 4-5 inches long—the width of an average man’s palm—and some as much as 7 inches. 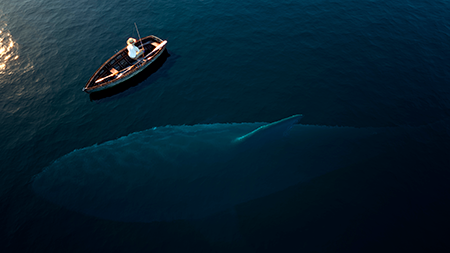 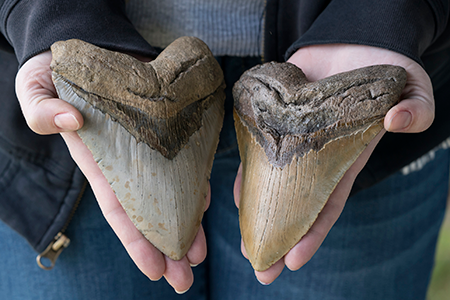 So how big did a megalodon’s entire body get? We don’t really know. Like most sharks, megalodons apparently were made mostly of cartilage, and cartilage does not preserve well in rock layers. So, like a lot of dinosaurs that are reconstructed from only a few fossils, scientists make a lot of guesses when they attempt to reconstruct what an entire megalodon looked like. But many estimate they reached lengths of 40-60 feet.

A few years ago, a shark was caught on tape that was quite shocking to some—it was thought to be a “prehistoric” frilled shark. Sometimes caught in fishermen’s nets, but rarely seen alive, this creature supposedly can be traced back 95 million years ago in the fossil record—thus, the description “prehistoric” shark. The problem is, frilled sharks are anything but “prehistoric.” They are living animals (which happen to also be known from the fossil record, just like many other animals). Even though they may look like scary creatures from an (inaccurate) evolutionary painting depicting “prehistoric” times, they are as modern as hippos, human beings, and humpback whales—all of which God made on days five and six of Creation only a few thousand years ago, not millions. 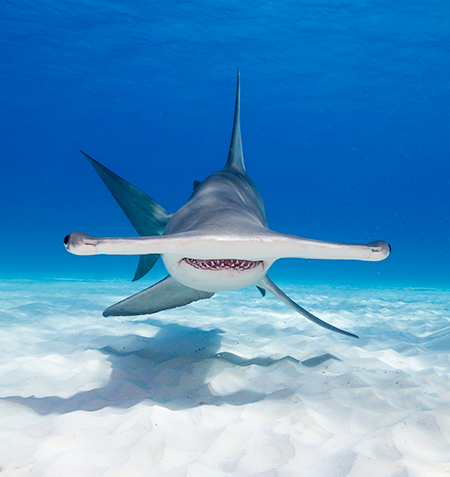 Hammerhead sharks are some of the most curious-looking creatures on the planet. Their heads actually look a lot like hammers, and their eyes and nostrils are spread far apart—at the ends of the “hammer.”

God designed hammerheads, like many other kinds of sharks, with extremely sensitive heads, which allow them to detect the slight electrical signals that their prey (such as stingrays) give off in the water and under the sand. Such complex design and abilities of the hammerhead defy evolutionary explanations.

Though sometimes a little scary or bizarre-looking, sharks are just one more amazing testimony to the grand Creator. “O Lord, how manifold are Your works! In wisdom You have made them all. The earth is full of Your possessions—this great and wide sea, in which are innumerable teeming things, living things both small and great” (Psalm 104:24-25).