I first learned about scorpions growing up on the Arizona desert. It was not unusual for one to walk across our living room floor! The scorpion is yet another one of God’s amazing creatures. Though commonly thought of as desert animals, they actually live all over the world. Similar to spiders, mites, and ticks, scorpions have eight legs and belong to the Arachnidaclass with some 1,400 species worldwide. Scorpions have a long body and a segmented tail that is tipped with a venomous stinger. They have a pair of plier-like pincers (pedipalps) for grasping. At the end of the abdomen is the telson—a bulb that contains venom glands and has a sharp, curved stinger to inject the venom (see Revelation 9:5).

Scorpions are mostly nocturnal, yet God designed them to handle the cooler temperatures by giving them extra layers of fat on their exoskeleton (external skeleton) that helps them maintain their internal fluid level. Shining a black light on a scorpion in the dark causes the fluorescent chemicals in its body to glow.

Scorpions feed on insects, spiders, centipedes, and even other scorpions. Their pincers are equipped with fine, highly sensitive hairs that sense vibrations in the air, while the tips of their legs have small organs that detect vibrations in the ground. The moment an insect touches these motion detectors, the scorpion uses its pincers to catch the prey. It can go long periods without food due to its very efficient food storage organ.

Another amazing aspect of the divinely designed scorpion is its venom—a complex mixture of neurotoxins (toxins that affect the victim’s nervous system). The scorpion can actually control venom flow based on the size of the target. It can use “pre-venom” when first faced with a threat. If the threat continues, it can release a more potent venom. This ability enables the scorpion to conserve venom for use when more is needed for larger predators or prey. This ability points to the Grand Designer! Like all of God’s complex creatures, there is so much more to learn about scorpions that humans do not yet understand. 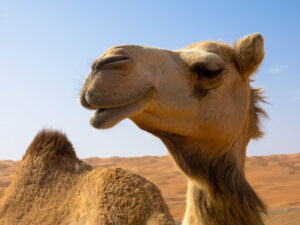 The Amazing Nose of a Camel