Man has been constructing airplanes for more than a century. From the Wright brothers’ first gliders to Boeing’s popular 747s to the U.S. military’s stealth bombers, flight technology has become so advanced and high-tech that one can only imagine what aviation engineers will invent next, or whence they will get inspiration for new flight designs.

Wonder no more. According to Live Science senior writer Jeanna Bryner, a team of mechanical and aerospace engineers is designing a new, 32-inch spy plane called Pterodrone. According to the design team,

The next generation of airborne drones won’t just be small and silent. They’ll alter their wing shapes using morphing techniques to squeeze through confined spaces, dive between buildings, zoom under overpasses, land on apartment balconies, or sail along the coastline (Bryner, 2008).

Scientists expect Pterodrone to be equipped with gyroscopes and a GPS, while being able to walk as well as fly.

What exactly inspires a group of highly educated, 21st-century engineers to design such a flying machine? Whence is the self-styled “design team” getting inspiration for their new flying mechanism? Answer: From Tapejara wellnhoferi, a flying reptile that supposedly evolved and went extinct 60+ million years ago. Bryner called the pterosaur “one of the savviest movers of the Cretaceous…a morphing machine” (2008). Based upon their study of the fossil record, scientists believe

Tapejara walked on four legs before rearing up on its two back limbs and running to reach takeoff speed. Once airborne, the beast could cruise at some 19 mph…. [T]o snap up fish food, the reptile would bend the tips of its wings up to form a three-mast sailboat structure with its body. The membranous crest atop its head would have served as the third sail, used as a rudder for steering (Bryner). 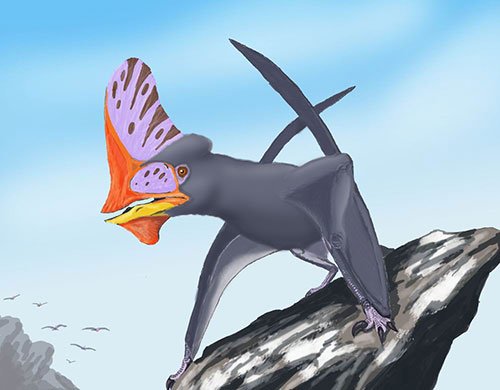 Mankind has been building flying machines of all shapes and sizes for more than 100 years. Just when you might think that engineers have perfected aircraft design, they improve by mimicking movements of an extinct pterosaur. Amazingly, though evolutionists admit Tapejara was a “morphing machine,” which had “nerves that served as sensors for temperature, pressure and wind direction,” and now has “inspired” a “design team” to build a “newly designed spy plane” (Bryner, emp. added), allegedly the pterosaur itself was simply the product of millions of years of blind, non-intelligent, random chance processes. So “the real deal,” as Bryner called Tapejara, was not designed by a designer, while the copycat is meticulously “designed” by a “design team” during a “design phase” (Bryner). Once again, we see how far copying kings (bio-inspired scientists) will go to reject and dishonor the Creator, the King of kings (Colossians 1:15-18).

For since the creation of the world His invisible attributes are clearly seen, being understood by the things that are made, even His eternal power and Godhead, so that they are without excuse, because, although they knew God, they did not glorify Him as God, nor were thankful, but became futile in their thoughts, and their foolish hearts were darkened. Professing to be wise, they became fools, and changed the glory of the incorruptible God into an image made like corruptible man—and birds and four-footed animals and creeping things (Romans 1:20-23).