It is fascinating how, throughout history, God has used H20—physical water—for spiritual purposes. He used the water of the Flood to cleanse the Earth of spiritual corruption (Genesis 6:11-13). As the Israelites were fleeing from Egypt and Pharaoh, He used the water of the Red Sea as their escape route. But He also used that occasion to baptize the children of Israel into the relationship that He would have with them through Moses (1 Corinthians 10:2). They were immersed in water—walls of water on their left and right, and water in the cloud that hovered above them. God used the waters of the Jordan River to cleanse the leprosy of Naaman, the Syrian military commander (2 Kings 5:14). The event caused him to declare: “Indeed, now I know that there is no God in all the earth, except in Israel” (vs. 15).

Jesus used water to restore sight to the blind man. He spat on the ground and made clay with the saliva. He then anointed the eyes of the blind man with the muddy mixture, and told him to go to the pool of Siloam and to wash the clay off his eyes. Having done so, the man could see for the first time in his life. When the Jewish leaders refused to believe this miraculous use of water—and the identity of the One who used it to heal the blind man—he answered them: “Why, this is a marvelous thing, that you do not know where He is from; yet He has opened my eyes! Since the world began it has been unheard of that anyone opened the eyes of one who was born blind. If this Man were not from God, He could do nothing” (John 9:30,32-33). 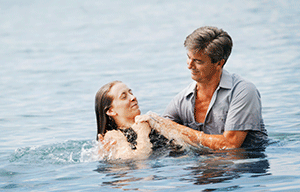 The crowning masterpiece of Jesus’ use of water for spiritual purposes is seen in His conversation with Nicodemus. To enter into the kingdom of God, Jesus said one must be “born of water and the Spirit” (John 3:5). He meant that a person must be immersed in water in accordance with the Spirit’s instructions given in the Gospel. As Paul explained, to contact Christ’s death and blood, a person must be “buried with Him through baptism” (Romans 6:4). No wonder Peter announced to those who suddenly realized that Gentiles had the right to become Christians: “Can anyone forbid water, that these should not be baptized…?” (Acts 10:47). And no wonder Peter declared that baptism “now saves us” (1 Peter 3:21). He meant that Christ’s death, burial, and resurrection do not save a person until he or she is baptized.

Praise God for His amazing use of water!