[Editor’s Note: Alana holds a Master’s degree in Astrophysics from the University of Alabama.] 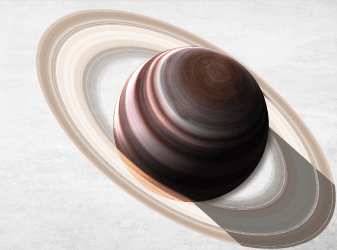 Saturn is probably the most recognizable planet in our Solar System with large, bright rings encircling it. It is the sixth planet from the Sun, the second largest Gas Giant planet, and about twice as far from the Sun as Jupiter. Saturn is an intriguing planet—from its size, to its wide rings, to its diverse moons.

The Creation account in Genesis tells us that all heavenly bodies were created on the fourth day of Creation (Genesis 1:14-19). When the Bible says that God created the stars on the fourth day, this description includes all the other objects in space that we can observe, including the planets. The term “light” (vs. 14) simply means “luminous body or luminary.” To the ancient astronomers, Mercury, Venus, Mars, Jupiter, and Saturn were known as “wandering stars.” Since they appeared as lights in the sky, they were called stars, and since their relative motions differed from the majority of other objects, they were described as wandering. Actually, the Greek term translated “wandering” is where we get our English word “planet.”

Saturn, the ringed beauty, attests to God’s greatness and splendor, but it also speaks loudly against evolution. In studying distant objects, astronomers often create computer simulations to test their theories. They must take into account the physical properties of the system in question and apply the physical laws of the Universe to predict how the objects might behave.

One of these models that astronomers use is how a solar system might form. A simplified view of the evolutionary planetary theory goes something like this: Gas and dust particles surrounding a star are gravitationally bound in a protoplanetary disk. Over millions of years, these particles coalesce into planetesimals, which continue to acquire more particles over millions of years, and eventually form into full planets.1

However, when trying to explain the formation of the solar system from an evolutionary standpoint, the models fail to explain why a gas giant like Saturn has not merged or migrated into its host star before the planet had time to form. Evolutionary astronomers call this the “migration problem,” which basically states that the gravitational interaction between the protoplanetary disk and the massive gas giant cores would cause them to move rapidly toward and merge into the central star.2

The Rings of Saturn

In October of 1997, the Cassini-Huygens spacecraft was launched on its mission to Saturn. It was loaded with a multitude of equipment, cameras, and other scientific instruments that astronomers hoped would help us learn more about Saturn and its moons. By July of 2004, Cassini-Huygens had made the 890 million-mile journey to Saturn. The Cassini mission allowed astronomers to get an amazing, up close look at Saturn, its rings, and moons. In April of 2017, Cassini started its “Grand Finale” mission, making weekly passes of Saturn’s rings, and diving through a 1,200 mile space between the planet and rings, until it made its final descent into Saturn’s atmosphere on September 15, 2017.3

While all of the Gas Giants have a ring system, Saturn’s is by far the most prominent. Saturn’s rings are not solid, uniform structures, but are made of billions of particles. Looking at Saturn’s rings face-on reveals gaps within the rings. These divisions have been classified among the ring groups and labeled alphabetically in the order they were discovered. Each ring grouping orbits Saturn at a different speed.

The width of Saturn’s rings varies. At the thickest point, the main rings are just over a half mile thick, where the thinnest point can be just 30 feet. Saturn’s rings extend outward away from the planet a distance of approximately 175,000 miles, which is equal to three-fourths of the distance between Earth and the Moon.4

The ring material also varies greatly in size. The smallest particles can be tiny clumps of ice, while the largest can be bigger than an automobile. While the ring structure of Saturn is amazing to behold, the origins of the structure have continually stumped the modern scientific community. Based on their evolutionary timetables and long periods of time, evolutionary astronomers have not been able to satisfactorily answer the question of where the rings came from and cannot reconcile the rings’ “youthful” appearance and reflectivity.5 Based on their evolutionary models and constraints, the ring structure should have dissipated long ago, and the rings should be much darker than they are due to dust and particles settling on the icy chunks that make up the rings.

Everything God created is meant to reflect His glory. Saturn is an excellent example, as we see magnificent beauty in this Gas Giant planet and order in the structure of its rings. Evolution cannot explain the origin of the majestic planet. The only reasonable answer is that God, the Grand Designer, created this stunning planet. “Come and see the works of God; He is awesome in His doing toward the sons of men” (Psalm 66:5).