Factual Accuracy Inspiration of the Bible
From Issue: R&R – October 2021

The historicity of the contents of the Bible, and the Bible’s uncanny accuracy in its handling of people and circumstances long since faded into the annals of ancient history, are powerful demonstrations of its supernatural origins. Take, for example, the occasion when Paul and Silas were imprisoned in the Roman town of Philippi (Acts 16). At about midnight, as they were singing hymns to God, an earthquake—Luke says it was a “great” one—literally shook the foundations of the prison, causing all the doors to open and the manacles on the prisoners to release. Roused from his sleep, the jailer saw that the prison doors had been jarred open, causing him to fear that the prisoners had, in fact, escaped. Consequently, he “drew his sword and was about to kill himself” (Acts 16:27). Why? True, allowing prisoners to escape is bad, but why would it merit committing suicide?

The historical evidence indicates that Roman jailers were required to take personal responsibility for the prisoners committed to them. This fact is reflected in the text where we are told that the “magistrates”1 of the city “command[ed] the jailer to keep them securely. Having received such a charge, he put them into the inner prison and fastened their feet in the stocks” (Acts 16:23-24). This “charge” was serious business. Negligence in this matter meant inevitable death—perhaps even by slow, painful torture.

No doubt influenced by Roman protocol along this line, when Peter escaped from custody, King Herod “examined the guards and commanded that they should be put to death” (Acts 12:19). Likewise, when Paul was being taken to Rome along with many other prisoners, hurricane force wind eventually drove the ship aground. Amid the turbulence, the Roman soldiers, who were charged with the custody of the prisoners, had formed a plan: “And the soldiers’ plan was to kill the prisoners, lest any of them should swim away and escape” (Acts 27:42). It was only because Paul had befriended the centurion that the intention of the soldiers was thwarted.

Such instances illustrate Roman law pertaining to “the custody of criminals” (de custodia reorum), which meant the jailer would have faced the same punishment that was to be inflicted on the escaped prisoner.2 Rather than face disgrace and a painful execution, the jailer decided to end his own life. The Roman code of honor necessitated it.3 Due to Paul’s diligence and love for lost souls, praise be to God that this suicidal pagan became a Christian.

1 The Greek has strategoi, which is the term Greek historians used to refer to the Roman political and/or military office of praetor—another proof of Luke’s historical accuracy. 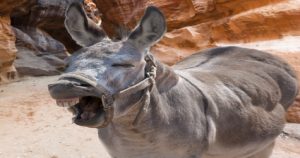 Does Balaam's Talking Donkey Prove That the Bible Is a Book of Fables?