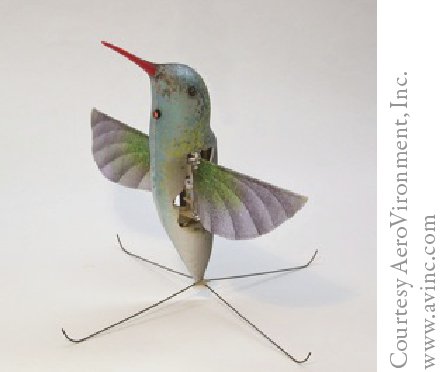 Imagine looking out your window one morning as the birds come to the feeder and seeing a hummingbird. As you look closer, however, you realize this is no ordinary hummingbird. It hovers, moves forward and backward, and is about the same size as other hummingbirds that you have seen, but this one has some striking differences. It is made out of lightweight, synthetic material and has a camera in its stomach, which is pointing right at you, filming everything you are doing! Anyone staring at a camera-laden hummingbird droid would immediately wonder who designed the machine and why it was sent. No one would entertain the idea that the perfectly functioning robot somehow evolved from natural processes that were at work in a junkyard down the street.

While this hummingbird robot sounds more like science fiction than science, it happens to be the latest gismo produced by the California-based company AeroVironment (Watson, 2011). Watson reported that the “Pentagon has poured millions of dollars into the development of tiny drones inspired by biology” (2011, emp. added). The product of this research is a robotic hummingbird “with a 6.5-inch wing span” that weighs “less than a AA battery and can fly at speeds up to 11 mph” (2011). The device has taken AeroVironment five years to produce and cost about four million dollars.

When compared to a “real,” living hummingbird, this contraption looks clumsy. Real hummingbirds can fly 25 miles per hour, and reach diving speeds of 60 miles per hour. They normally flap their wings about 50 times per second, but can flap them up to 200 times per second. If the amazing mechanical hummingbird took millions of dollars, several years, and a host of brilliant engineers to design, what are we forced to conclude about the real thing? Whoever designed it must have been more intelligent than the combined intelligence of the entire human engineering populace, since this latest hummingbird robot represents the very best humans can do. The supposed naturalistic process of evolution could never account for a creature like the hummingbird, nor for a mechanical imitation of it. When God asked the patriarch Job, “Does the hawk fly by your wisdom?” (Job 39:26), He was stressing the fact that flying creatures like hawks and hummingbirds provide outstanding evidence that God exists, and He knows infinitely more about everything than man does.