Although not all scientists approve of the terms biomimicry and biomimetics (since some allege that scientists only “learn” from life, rather than “mimic” it), one thing is certain: increasingly, more scientists are looking to the biological world for inspiration for their inventions (see Benyus, 2002). In a recent Business Week article titled, “Mother Nature’s Design Workshop,” Carlos Bergfeld reported that scientists are finding “the inspiration for the latest in surveillance and defense technologies…by looking long and hard at insects and other small creatures” (2006). Bergfeld listed several recent inventions inspired by “nature’s design,” including tiny reconnaissance drones, inspired by the “micro-sized, flappable, flexible wings of bees,” and RoboLampreys, which imitate the lamprey’s ability to “stealthily probe upper-level waters, searching for underwater hazards.” One other defense mechanism listed is known as RoboLobster (“cousin” of RoboLamprey). 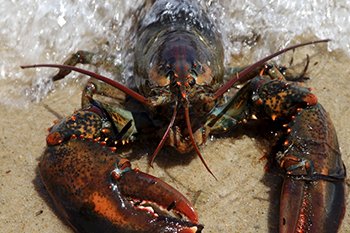 At Northeastern University’s Marine Science Center in Nahant, Massachusetts, Joseph Ayers built RoboLobster in hopes of saving lives. The 7-pound, 24-inch lobster-inspired robot can search for deadly mines and carry out other tasks by “mimicking how an actual lobster combs the ocean floor for food” (Bergfeld, 2006). Of all the amazing creatures to imitate, one might wonder why scientists chose lobsters to study. Apparently, it’s all in the way they move.

Lobsters can stealthily navigate turbulent water and land, and can even automatically adjust their posture and position in order to stay still in choppy waters. Lobsters walk the ocean floor preying on clams, starfish, sea urchins, and other forms of sea life. So the theory is that an artificial lobster would be adept at prowling for mines in harbors and coastlines. According to the Office of Naval Research, shallow waters are particularly difficult areas for mine hunting because of the surge of waves and the lack of visibility (“Robotic…,” 2003).

Though not yet implemented by the Navy, RoboLobster’s minesweeping techniques show great potential. The lobster-like robot has been so impressive that Time Magazine named it one of the “Coolest Inventions of 2003” (see “Coolest…”). Normally lauded for their exquisite taste, lobsters are now recognized for their amazing design and ability to “automatically adjust their posture and position” in turbulent waters (“Robotic…,” emp. added).

Imagine seeing RoboLobster crawling in the shallow waters off of a beach. Its eight industrial-strength plastic legs work just right to move it in any direction. Its antennas sense obstacles to avoid or destroy. Its claws and tail stabilize it in rough waters. This engineering feat would not go unnoticed. You would conclude (like any rational person) that this gadget is the product of intelligent design. One or more individuals must have spent countless hours researching, designing, and assembling this lobster-like robot.

Now imagine seeing a real lobster scurrying along the same ocean floor. You recognize that its body is designed perfectly for the actions it performs. You observe its claws, legs, eyes, antennas, and tail. You watch how effortlessly it maneuvers, “automatically” adjusting its posture and position in turbulent waters. Every organ in its body functions perfectly.

To what do we owe the real, living lobster—mindless time and chance, or an Intelligent Designer? Carlos Bergfeld alleged that the “tried-and-true designs” (emp. added) of many creatures (e.g., lobsters) are the “product of millions of years of evolution” (2006). Supposedly, “Mother Nature’s 4 billion years of research” (Bergfeld, 2006) inspires these scientists in their life-like inventions. The Bible says otherwise (Genesis 1; Exodus 20:11). Common sense also tells us that design demands a designer. Poems demand poets. Paintings demand painters. Songs demand songwriters. And, just as bio-inspired robots demand an inventor, the living organisms that are increasingly imitated in science laboratories all over the world demand an Intelligent Designer.

For every house is built by someone, but He who built all things is God (Hebrews 3:4).

The heavens are Yours, the earth also is Yours; the world and all its fullness, You have founded them. The north and the south, You have created them (Psalm 89:11-12).