You are aware of the systematic cleansing of America’s public schools and government buildings by the elimination of references to God and the Bible. This conspiratorial departure from the nation’s origins has been illustrated once again—but in a rather unexpected place: the detention center for suspected terrorists at Guantanamo Bay, Cuba. The politically correct crowd saw to it that every Muslim had access to a Quran. Oh, yes, inmates who want a Quran are carefully accommodated. But when a Pakistani Muslim inmate (detained for alleged ties to Osama bin Laden) requested a copy of the Bible—no can do.

Though the Quran is preeminent to the Muslim, Islam nevertheless acknowledges the Bible as Scripture from God. So, when he requested that his lawyer ship him a copy of the Bible, prison officials promptly confiscated the package. U.S. government lawyers said the detainee had not shown that the practice of his religion had been “substantially burdened” by being deprived of a Bible.

Unbelievable! Our own people no longer see the Bible as necessary, or its unavailability as adverse and creating a hardship. Since the Bible is the inspired Word of God, an honest Muslim would have the opportunity to see the stark difference between the Bible and the Quran. He might repent of his terrorist bent and pursue “the peace that passes understanding” (Philippians 4:7). But we can’t have that!

We live in a time warp far removed from America’s origins. The Founders clearly believed that the initial existence and future survival of the Republic was heavily, if not exclusively, dependent on the successful diffusion of the Bible throughout society. While abundant evidence for this assertion exists, consider just one example. A year after declaring independence from England, the Colonies began to feel the effects of the British embargo. Consequently, the Continental Congress directed a committee to investigate ways by which Bibles could be secured. The committee made its report on September 11, 1777, stating “that the use of the Bible is so universal, and its importance so great…your Committee recommends that Congress will order the Committee of Commerce to import 20,000 Bibles from Holland, Scotland, or elsewhere, into the different ports of the States of the Union.” Congress promptly ordered the importation (Journals of…, 1907, 8:734-745). 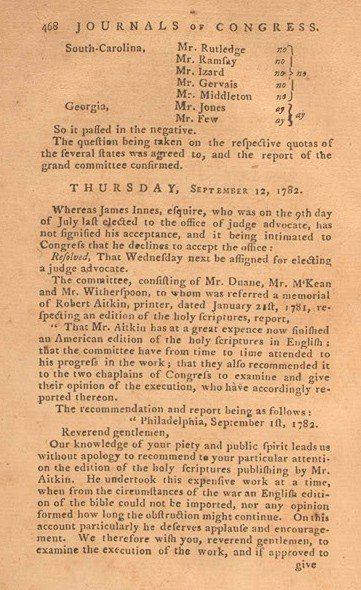 Four years later, as the shortage continued, importation became sufficiently impractical that Congress was again petitioned for approval, this time to print Bibles in America rather than purchase them abroad. The request was approved and upon completion of the printing, on September 12, 1782, the full Congress not only approved the edition, but their endorsement was given in the front of the Bible: “Whereupon, Resolved, That the United States in Congress assembled…recommend this edition of the Bible to the inhabitants of the United States” (Journals of…, 1914, 23:574). 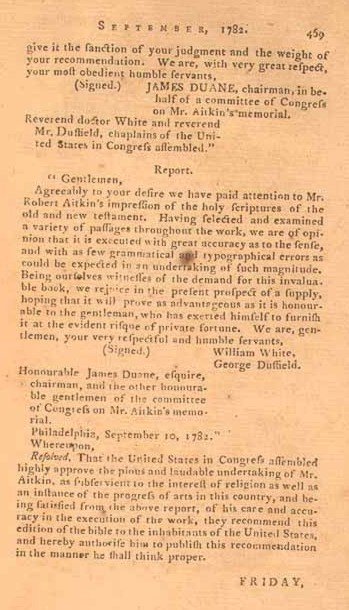 Who today would believe that the original Congress of the United States considered the Bible so important to national existence that they would expend effort—even in wartime—to make certain that Bibles were available to the American population? The present widespread loss of respect for and interest in the Bible, if continued, will spell our national doom.

By the way, government lawyers representing prison officials at Guantanamo Bay also argued that letting the Islamic detainee have a Bible would “set off a chain reaction among the other 170 detainees” and “incite them” (Serrano, 2005). Oh, but don’t you see? That’s precisely what needs to be done.