Modern ways of dating rocks are supposed to be able to give ages in the billions of years. These are the radiometric dating methods. Each of these methods is based upon the decay rate of certain elements. In one method, for instance, the element uranium-238 will break down into the element lead over a period of many years. The element that breaks down (in this case, uranium-238) is called the parent element. The element that is formed (in this case, lead) is called the daughter element. How long is this supposed to take? In the case of uranium and lead, the half-life is supposed to be 4.5 billion years. A half-life is simply the time that it takes for half of a sample of the parent element to turn into the daughter element. For instance, if you have 50 ounces of uranium, then in 4.5 billion years you supposedly should have 25 ounces of uranium and about that many ounces of lead. Therefore, if you know the rate of decay for an element, once you measure the amount of the two elements in the rock sample, simple math should give you an age for the rock. However, there are certain things that scientists must assume in order for radiometric dating to work. Let’s look at those assumptions.

Assumption 1: The Rate of Decay Has Always Been the Same 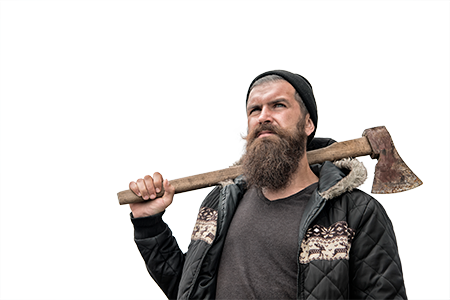 The first major assumption built into radiometric dating is the idea that the parent elements have decayed in the past at the exact same rate as they are decaying today. This idea has problems, because no one alive today knows what kind of environment existed in the distant past. We cannot claim to know how fast elements decayed in the past, because we have very little evidence to prove this idea (which is why it is an assumption). Let’s consider how badly this idea could alter the age of the Earth. Suppose you come upon a man who is cutting down trees in a forest. You watch him for an entire hour, and he cuts down only one tree. Then you count the number of trees he has cut—31 in all. If you assume that he has been cutting trees down at the same rate, then you calculate that he has chopped for 31 hours. However, when you talk to the man, he tells you that, earlier in the day when his ax was sharp and his stomach was full, he was cutting down five trees an hour; only in the last hour had he slacked off. With this information, you now understand that he worked for only seven hours, not 31. Claiming that the decay rates in the past were the same as they are now is an assumption that cannot be proven and should not be granted to those who want an age for the Earth measured in billions of years.

Assumption 2: Elements Have Not Been Affected by Outside Forces

Another assumption built into the radiometric dating methods is the idea that the elements have not been affected by outside forces. That means that no water has soaked through the sample and “carried away” some of the lead, or that none of the uranium had a chance to escape through holes in the rock. However, this is a huge assumption. How can a person claim that natural forces have not affected the elements in a rock for a period of billions of years? In 4.5 billion years, could it be slightly possible that water seeped through the sample and added or subtracted some lead or uranium? Furthermore, could there be an “outside chance” that some of the uranium seeped out of pores in the rock? If any rock were really 4.5 billion years old, no one in this world would have a clue what had or had not gone in or out of the rock over that vast amount of time. Once again, the assumption that certain rock samples are “closed systems” simply cannot be granted.

Assumption 3: No Daughter Element Existed at the Beginning

To date rocks using any radiometric dating system, a person must assume that the daughter element in the sample was not there in the beginning. However, that claim cannot be proven. Who is to say that the rock did not start out with 23 ounces of lead already in it? The lead could have been in the rock from the beginning (and so could the uranium). To illustrate this point, suppose you go to a swimming pool and find a hose that is pumping water into the pool at a rate of 100 gallons an hour. You discover that the pool has 3,000 gallons of water in it. You calculate that the hose must have been running for 30 hours. However, when you ask the owner of the pool how long she has been running the hose, she tells you that she has been running it for only one hour. Most of the water was already in the pool due to a heavy rain the night before. If you assumed that all the water came from the hose, your calculations would be way off—29 hours off to be exact. Assumption three, that no daughter element existed at the beginning, simply cannot be granted.

Another Problem with Radiometric Dating