Now let’s talk about porcupines’ most interesting feature—their quills. These quills are actually specialized, hardened hairs that are made out of keratin, which is the same stuff that makes up human hair and fingernails. Porcupines are almost completely covered in quills, except for a small place on their face, their bellies, and the bottoms of their feet. If you have watched some cartoons, you may have seen an animated porcupine shoot its quills at a predator. People in the past thought they had this ability. We now know that they cannot shoot quills, but they can release them from their bodies so that if anything tries to attack a porcupine and touches the quills, it will get a nose full of needles. 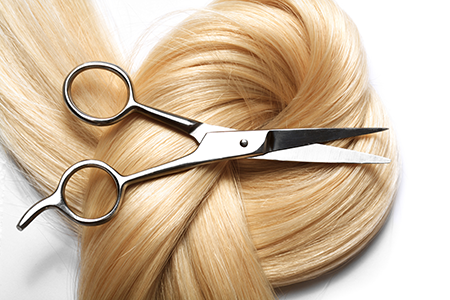 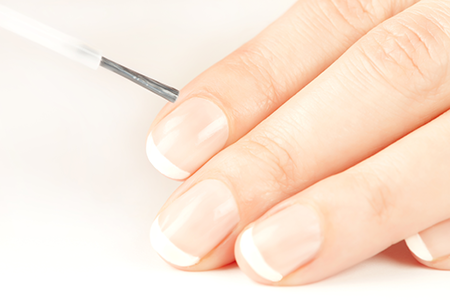 Several features of porcupine quills point to the fact that God, our intelligent Creator, is the only one Who could have designed them. First, the quills are covered in a greasy, fatty substance. For many years, no one knew what the slimy stuff did. People noticed, however, that when a quill stabbed a human or animal, it rarely caused any type of infection, but a similar stab by a splinter or other pointed object would get infected. It turns out that the greasy coating on a porcupine quill contains chemicals that fight infection, much like antibiotic ointment that is used in first aid kits. Further study revealed why this is the case. Porcupines can get rather fat. This does not help them climb well, and they sometimes fall out of trees. When they do, they often stab themselves with their own quills. God designed them to produce their own medicine so that when they do stab themselves, the wound does not get infected. Isn’t that neat? 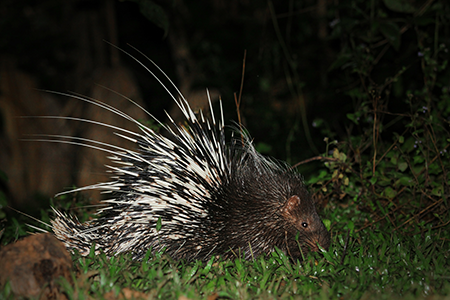 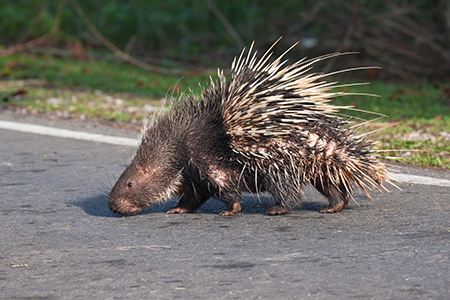 Another fun fact about porcupine quills is that they are easy to see in the dark. Why is that? Porcupines need predators to know they are covered with quills and are not a good meal. Since porcupines are nocturnal, they need a way to “advertise” their presence and defenses in the dark. One way they do this is by producing a special fluorescent pigment that coats the tips of their quills. This special “paint” makes the tips of the quills brighter at night and easier for predators to see. If the first thing a predator sees is a back full of super-sharp spikes, it is probably going to look elsewhere for a midnight snack! 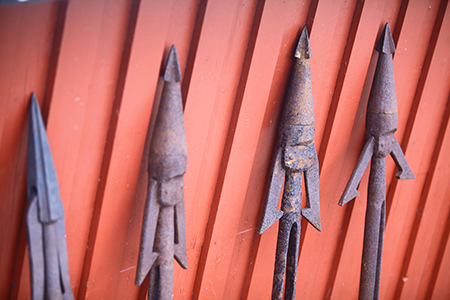 Maybe you have heard that porcupine quills are extremely hard to remove? This is because the quills have tiny barbs that cover their tips. These barbs are similar to those found on a fishhook or whaling harpoon. Scientists who study porcupine quills and barbs have learned some remarkable things. Because of the way the barbs are designed, it takes less force to push a barbed quill into something than it does to push a quill without barbs into the same thing. Why is that a big deal? People in the medical field have been looking for ways to create better needles that go into the skin using less force. The barb system on a porcupine quill has given them a good design to use for this purpose. This is an example of something we often talk about in Discovery called biomimicry—when humans copy God’s design in nature. Furthermore, the barbs make the quill difficult to pull out, because when pulled backwards the barbs flare out. This design is also useful in needles that need to “stay put” for a while and not slip in and out of skin.

Who would have thought that God’s amazing creative ability would be so clear in the quills of a porcupine? Once again, we learn that the more we look at God’s natural world, the more we see His wondrous work.