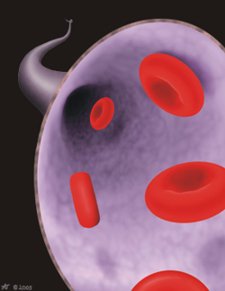 Ian McEwan may have stumbled across an idea that could change the way the world fixes leaks. The process could potentially save oil companies and water companies billions of dollars, and thousands of man hours. What is this new approach? One day McEwan was riding a train and cut his finger. As he observed the amazingly efficient blood clotting system of the human body, he wondered if artificial “platelets” could be used to “heal” holes in pipelines (Graham-Rowe, 2006).

Armed with this novel idea, McEwan, director and founder of Brinker Technology, put the concept to work. After several trial runs, the artificial platelet procedure appears to have serious potential for the oil and water industries. In fact, companies like BP and Shell have begun to test it on some of their pipelines. The results? BP used the platelet technology to plug an undersea pipeline, which saved them about three million dollars (Graham-Rowe).

Even though the process is much less expensive than most current mending procedures, it is not simple. The platelets vary in size, and the engineers must determine how big the platelets need to be to fix the leak properly. In addition, platelet hardness is variable as well. Some leaks, depending on their size, require softer platelets while others need harder ones (Graham-Rowe).

As complicated and effective as this new artificial platelet system is, it pales in comparison to the clotting system found in the human body that inspired McEwan. In fact, Michael Behe, professor of Biochemistry at Lehigh University, considers human blood clotting to be one of the most complex systems in the natural world. He stated:

Biochemical investigation, however, has shown that blood clotting is a very complex, intricately woven system consisting of a score of interdependent protein parts. The absence of, or significant defects in, any one of a number of the components causes the system to fail: blood does not clot at the proper time or at the proper place (1996, p. 78).

Many scientists would contend that human blood clotting is the result of accidental, evolutionary processes that were not guided by any intelligent mind. Such a conclusion, however, fails to deal rationally with all the evidence. If it takes an intelligent engineer to construct a platelet procedure that patches pipelines, and if that artificial platelet system is not as effective as the human blood clotting scheme, then it must have taken an even more intelligent engineer to design the human blood clotting system. This is the only logical, honest conclusion that can be drawn from the evidence. The next step, then, is to recognize that Designer as the God of the Bible, Whose “invisible attributes are clearly seen, being understood by the things that are made, even His eternal power and Godhead” (Romans 1:20).