Some of the most amazing birds of all are penguins—the only animals that look like they are dressed in tuxedos! Their unusual appearance is not the only thing that sets penguins apart from other birds. All of the 16 different types of penguins are well-designed to live in their different habitats. Emperor penguins, for example, make their home in the Antarctic (one of the coldest places on Earth). Not only do they survive the bitter cold, but they also make perfect parents.

Emperors spend most of the summer at sea, feeding and growing fat. At the start of winter, they return to the icy shore where the mother lays one very large egg. Because there is nothing but snow and ice where they live, these penguins do not make nests. If their eggs were left on the ice, they would freeze solid! But God has taken care of this problem. Emperors have a fold of feathered skin which hangs down from their bellies. The mother rolls the egg onto her feet, and covers the egg with this fold of skin. She then passes the egg to the father who covers it with his fold of skin. The mother returns to the sea for about two months to eat. As she does, she stores food in her crop (a pocket in her throat). The father penguin stays behind keeping the egg warm and waiting for it to hatch.

About the time the egg hatches, the mother returns with her crop full of fish. She feeds the chick with this food. While she cares for the chick, the father goes back to the sea to eat (remember, he hasn’t eaten for two months!). He stays gone for a few weeks, and then returns to take his turn at feeding the baby. The parents take turns feeding the chick for about six months. One parent goes out to sea and eats, while the other stays home and “babysits.”

Could you believe that this beautiful design happened by chance? The theory of evolution says that it did. But the Bible says that God created the world and all things in it (Exodus 20:11). Perfect penguin parents didn’t “just happen.” God designed them. And what a great job He did! 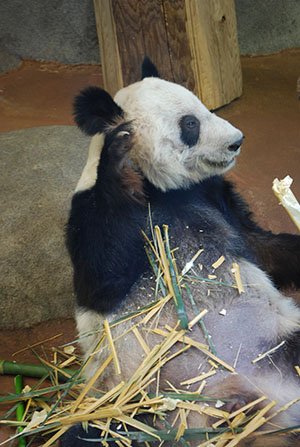