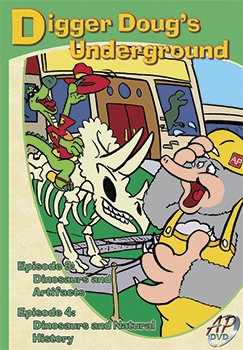 Last year, we announced the construction of our television studio and the development of our children’s program Digger Doug’s Underground which airs on the Gospel Broadcasting Network (GBN). Our talented team of workers are making great progress and continue to hone their skills in the ongoing production of this children’s television program. In addition to airing the show on TV, we have been determined to make these programs permanently available to a wider audience, enabling children to view them at their own leisure as often as they choose. We are happy to inform you that the next two episodes are now complete and available for shipping. Volume 2 of Digger Doug’s Underground on DVD is packaged in an attractive and colorful DVD box. Episode Three is titled “Dinosaurs and Artifacts,” while Episode Four is titled “Dinosaurs and Natural History.” The first two episodes in Volume 1 were titled, “What about the Big Bang?” and “After Their Kind.”

Here is a Christian program that rivals any secular children’s TV show, yet offers to young minds critical content on God as the Creator. I have been amazed at children’s reactions to this program. For example, consider the remarks we received recently from a college student in Tennessee whose five-year-old brother is an avid viewer of the program:

My brother’s name is Bill, and he is five-years-old. He watches Digger Doug over and over on DVD and on GBN and has memorized facts and names of dinosaurs, as well as the different words examined on each episode (as defined each time by Willie the Word Worm). The other day, Bill and his friend Dustin were playing with some of Bill’s dinosaur toys. Dustin said one of the names of the dinosaurs and Bill responded, “No, Dustin, that’s all wrong!” He proceeded to correct Dustin’s pronunciation and included a few additional facts about that particular dinosaur, adding that he knew all of this information “because I have two [A.P.] books about dinosaurs.” Bill can also sing the entire [Digger Doug theme] song. You know, I think the song is great. But it can get annoying after the first few hundred times you hear it. (Ha!)

Children are like sponges—and they inevitably “soak up” those influences to which they are exposed. How fundamentally critical for parents and grandparents to provide resources to shape and nurture their children and grandchildren in the direction of God and His Word. Even as Moses warned the Israelites, “teach them to your children and your grandchildren” (Deuteronomy 4:9), so Paul admonished Christian parents to “bring them up in the training and admonition of the Lord” (Ephesians 6:4).

I urge you to secure copies of both volumes of these DVDs (four 28-minute episodes in all) for children, grandchildren, and others you know who need the training and nurturing that this fascinating program provides and the timely truths it treats.