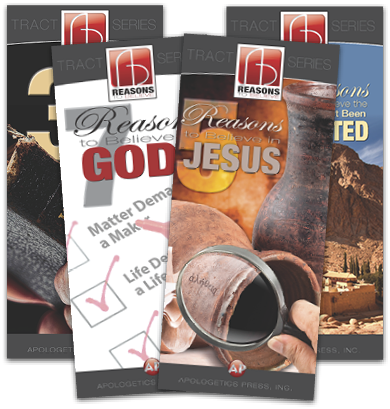 As you know, tracts are a great way to evangelize. Tracts provide a succinct treatment of an important Bible topic so that the reader can get to the heart of a matter quickly. Many people may not sit down and read a book. But when they see a tract with an intriguing title pertaining to a critical, timely topic, they will often pause out of curiosity and flip through the tract to get an answer. For many years, Apologetics Press has recognized the value of tracts and, consequently, has produced many, including two series of children’s tracts.

We are now pleased to release a new line of tracts that address foundational truths desperately needed by current culture. Here are the titles—specifically calculated to grab the attention of the non-Christian:

This series is designed to convince the inquiring non-Christian that we can know God exists, that Jesus is divine, that the Bible has not been corrupted in transmission, and that the Bible possesses attributes that demonstrate its supernatural origin. Consider stocking up on these tracts to use in your own efforts to evangelize those you encounter. For example, what about leaving a tract on the table every time you eat in a restaurant? Or enclosing a tract in the same envelope you use to pay a bill? Or leaving one at your doctor’s office? Reasonably priced, these tracts are intended to tantalize the secular mind in hopes of confronting him/her with the truth.

We are also pleased to report that the AP Web site has once again set new records, indicating its value as a successful, effective tool for reaching people all over the world. The centerspread of this issue of R&R provides some of the details that convince us that AP is making a worthwhile impact in our efforts to get the Gospel out to the lost world of humanity.