become prominent issues among politicians, Hollywood entertainers, and the media elite. Yet, few seem interested in determining what the Bible has to say about such concerns. A.P. recently released a new booklet that summarizes the Christian viewpoint on these much-touted issues of our day. This timely treatise should be helpful in pointing people back to the Creator Who governs the Creation.

My son absolutely loves the Digger Doug’s Underground DVDs!…. These are exactly what I’ve been seeking for my science-loving son. We’ve been through National Geographic and DK DVDs and books but they obviously focus on old-Earth and evolution.

I wanted to let you know that our grandson, almost 4, really enjoys the Digger Doug video you sent—and the books too. They are good books. I’ve read all of the children’s books to him. We are going to buy some more of the videos for him.

Digger Doug’s Underground—LOVE IT!… I was really impressed.

I bought the first of the Digger Doug DVD series…. I plan to buy Volume 2 and 3 of the series also…. Thanks for your part in making creation so easy for the kids to understand.

Such comments are typical. Here is a Christian program that rivals any secular 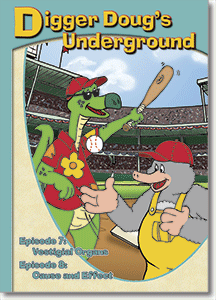 children’s TV show, yet offers to young minds critical content on God as the Creator. Let’s face it—children are impressionable. They inevitably will be affected by those influences to which they are exposed. How fundamentally critical for parents and grandparents to provide resources for their children and grandchildren that will shape and nurture their spirits in the direction of God and His Word.

Digger Doug’s Underground airs regularly on the Gospel Broadcasting Network (www.gbntv.org). In our desire to make these programs available to a wider audience, we are gradually transferring episodes to DVD. Three volumes are already on the market. We are happy to announce the release of the next volume. Like its predecessors, Volume 4 is packaged in an attractive and colorful DVD box and contains two 30-minute episodes. Episode 7 is titled “Vestigial Organs” and Episode 8 is titled “Cause and Effect.” Past episode titles include “Days of Creation,” “Biomimicry,” “Dinosaurs and Artifacts,” “Dinosaurs and Natural History,” “What about the Big Bang?” and “After Their Kind.”

In my humble opinion, these DVDs should be in the home of every Christian parent who has young children. I can assure you, my four granddaughters are thoroughly familiar with the program’s characters and the foundational principles they teach. Let us do everything possible to insulate our little ones, and prepare them to face the sinister forces that threaten their thinking. A significant discount applies when all four volumes are purchased together.