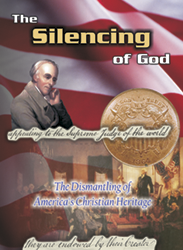 In our continuing mission to engage the spiritual enemies inherent in the culture wars being waged in America, we are pleased to announce the release of The Silencing of God Seminar on DVD. You are well aware that the United States of America is, indeed, undergoing swift transition as the forces of “political correctness” wage a vociferous culture war. Activist judges, secularist educators, immoral entertainers, and liberal politicians have teamed up to sell a sanitized version of America’s past. Their objective: to expunge every manifestation of God, Christ, and the Bible from American life. What has been the result of their intolerant, relentless assault on the traditional American values that lifted the U.S. to its unprecedented prominence among the nations of human history? The moral and spiritual underpinnings of American civilization are collapsing.

But America’s intimate connection to Christianity from the very beginning was embedded deeply in our public life. Though for 50 years these sinister forces have steadily chipped away at America’s now crumbling foundations, many indications of our nation’s Christian heritage remain. The historical evidence is voluminous and decisive: the Founders of the American Republic intended their political institutions to be based upon and rooted in the moral principles of the Christian religion.

The Silencing of God Seminar allows the viewer to take a trip back to the vanishing values of America’s past. The viewer will be astounded at what he sees and hears, and forcefully brought face-to-face with the perplexing question: How can a nation that has scaled such heights and viewed such vistas, stray so far from its original moorings? The Silencing of God Seminar issues a stirring plea—to the nation in general, and to Christians in particular—to return from the moral and spiritual depths to which we have plummeted, and to reassert the biblical values that are being stripped systematically from public life.

Here are some of the questions that the seminar explores:

Did the Founding Fathers…

The presentation concludes with a challenge to the nation to return from the depths of moral depravity, reclaim our Christian heritage, and reaffirm biblical values in public life. The seminar consists of 5 sessions of approximately 55 minutes each, situated on two DVDs. Significant discounts apply to bulk quantity orders. A must see for every Christian—and every American.