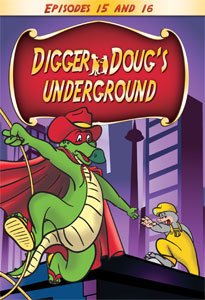 The pilot episodes of Digger Doug’s Underground, A.P.’s premiere children’s television program, were released in 2006. From the very beginning, we felt that this project had the potential to compete with secular programming like Barney and Sesame Street—complete with costumed animal characters, colorful sets, educational dialogue, and participatory singing. Based on the characters from our popular Discovery Magazine for children, our desire has been to impact as many youth as possible with basic Bible principles concerning God as Creator and the Earth as His creation. The program has been airing on the Gospel Broadcasting Network (www.gbntv.org) since its inception, and the outcome has been very encouraging.

We have been steadily converting the program to DVD format so that these episodes can long outlast their televised status. We are now pleased to announce the release of Volume 8 which contains episode 15, titled “Entropy,” and episode 16, titled “Natural Selection and Mutations.” All past episodes are still available and include the following titles: “What About the Big Bang?” “After Their Kind,” “Dinosaurs and Artifacts,” “Dinosaurs and Natural History,” “Days of Creation,” “Biomimicry,” “Vestigial Organs,” “Cause and Effect,” “Similar Things,” “Evolutionary Hoaxes,” “The Age of the Earth,” “Creation Scientists,” “Broken Bones, Broken Theory,” and “Humans and Dinosaurs.”

All episodes are packaged in an attractive and colorful DVD box. They are so captivating, we believe that you will find your children and grandchildren watching them over and over again. Even adults can learn from Digger Doug’s explanation of matters pertaining to homology, thermodynamics, and vestigial organs. If you still have not viewed one of these episodes, you should do so. You will wonder why you neglected doing so before now.