New York city is an amazing place to visit. The beautiful skyline with towering skyscrapers welcomes visitors to a city filled with people, excitement, and action. Thousands of visitors walk the streets of downtown Manhattan, order hot dogs from roadside carts, jog through Central Park, and wonder in amazement at the dazzling lights of Times Square. Among its many attractions, New York can boast of having some of the most fascinating educational museums in the entire world. The American Museum of Natural History continues to be one of the most popular destinations for visitors and locals alike.

The Natural History museum has an impressive array of exhibits that contain rock samples, fossils, carvings, bones, and preserved animal specimens from all over the world. When I arrived at the museum, I realized that a person could spend a week in the place and not see everything. I quickly decided to visit the exhibits that our Discovery readers would enjoy. The day I visited, the museum featured a special Tyrannosaurus rex event. The curators sectioned off a large area dedicated to all things T. rex. Immediately upon entering the exhibit, I realized that the main theme of the display was not T. rex. Instead, the main theme was the false idea of evolution and a presentation of how T. rex supposedly evolved from other kinds of dinosaurs. The fossils, pictures, and displays of T. rex were impressive, but the repetition of incorrect information about evolution was very disappointing.

Visitors to the event see a hatchling of baby T. rex. It is covered in feathers and looks almost identical to a bird. The model of the baby is life-sized and very professionally done. The main problem with it, however, is that it is completely made-up. Later in the exhibit, visitors read a statement that no one has ever found a T. rex egg, and certainly not a T. rex hatchling. And they read that researchers have never found a single T. rex fossil with feathers on it. The feathered baby T. rex is presented, yet there is not a single fossil that shows that any T. rex ever had feathers. Why would the museum do this? 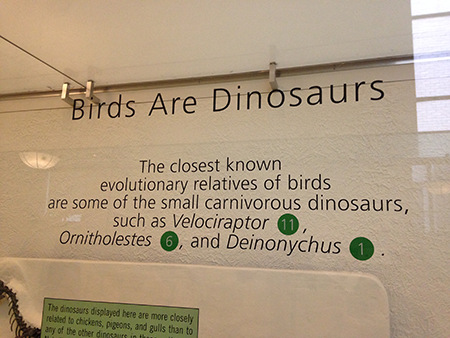 The people who designed the exhibit want visitors to believe that dinosaurs evolved into birds. In fact, the statement “Birds are Dinosaurs” is posted in several places. The fact is, that is absolutely false. Dinosaurs were not birds, they did not evolve into birds, and birds are not the evolutionary relatives of dinosaurs in any way. We know this for several reasons. First, the Law of Biogenesis states that in nature animals multiply after their own kind. When a pigeon lays an egg, the hatchling is always a pigeon—every time, with no exceptions. The Law of Biogenesis is a scientific law because never once in the history of the natural world has there been a single exception to it. Dogs give birth to puppies, cats have kittens, and a mother T. rex laid eggs that hatched baby T. rex dinosaurs—always, every time. Dinosaurs could not have evolved into birds or any other kind of creature, because that would be a violation of the verified scientific Law of Biogenesis.

Second, we know that birds were here before T. rex. How do we know this? In the book of Genesis we read that God created flying creatures, including birds, on Day Five of the Creation Week (1:20-23). We also know that T. rexdid not fly, but was a land animal and would not have been created on Day Five. Instead, we learn that all land animals were created on Day Six of Creation—the day after birds. T. rexcouldn’t have evolved into birds, because birds were here first. Furthermore, even people who believe in evolution are forced to admit that birds have been here longer than T. rex. We have found fossils of birds that date “millions of years” before T. rex supposedly evolved. Now, we know there never were millions of years and that T. rex did not evolve, but the fact that birds are where they are in the fossil record  proves they cannot be the relatives of T. rex.

It is disappointing that the American Museum of Natural History teaches such wrong ideas. Just think of the good that could be done if thousands of adults and children who visited each day were taught the truth about God and His awesome creation. Instead, they are taught false theories that are not based on real science or good evidence. The Natural History museum is a neat place to visit, but be ready to dig through the error that is taught, because there is a lot of it.