Producing a children’s television program is not an easy task. The logistics are enormous and complex. Nevertheless, the Lord has blessed Apologetics Press with the wherewithal to produce such a program, and we have taken the task seriously, in hopes that the Lord would use the program to solidify young hearts. Here are some indications of the results from parents: 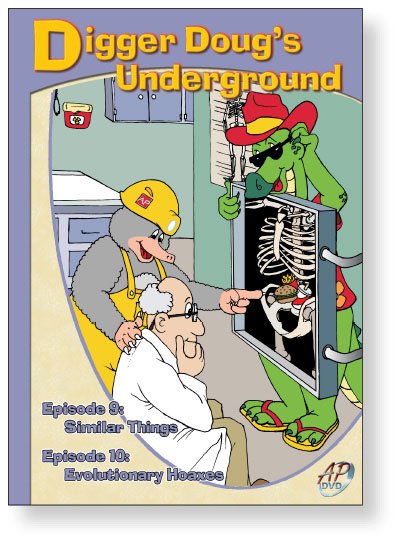 We just wanted to tell you how much Digger Doug has influenced our daughter…. She is five and loves Digger Doug and Iguana Don. In fact, she watches it every night with her daddy before we go to bed and then they talk about it. Thank you so much for providing our children with clean, informative, and scriptural television that we can let them watch without fear.

My son absolutely loves the Digger Doug’s Underground DVDs!… These are exactly what I’ve been seeking for my science-loving son. We’ve been through National Geographic and DK DVDs and books but they obviously focus on old-Earth and evolution.

We at A.P. are listening to what these parents are saying, and we are working steadily to accommodate their need. Digger Doug’s Underground is devoted to teaching children basic Bible principles concerning God as Creator and the Earth as His creation. Based on the characters from our popular Discovery magazine for children, the program consists of costumed animal characters, colorful sets, educational dialogue, and participatory singing. Young viewers are literally captivated by the substance and variety that is provided. They find themselves viewing the programs over and over again.

In addition to airing regularly on the Gospel Broadcasting Network (www.gbntv.org), we are slowly, but surely, transferring episodes to DVD. Four volumes are already on the market (8 episodes). We are happy to announce the release of the fifth volume. Like its predecessors, volume 5 is packaged in an attractive and colorful DVD box and contains two episodes—Episode 9 titled “Similar Things” and Episode 10 titled “Evolutionary Hoaxes.”

If you are a parent or grandparent, or if you are concerned about the spiritual development of children in your acquaintance, please consider providing these valuable resources for those children. You may well plant seeds now that will bear fruit years from now—even to the point of rescuing a soul from the destructive effects of evolution and the secularism that have literally inundated our culture. I urge you to secure copies of all five DVD volumes (ten 30-minute episodes in all) and help insulate children from the powers of darkness.