Producing a children’s television program is a monumental undertaking. Yet A.P. continues to direct some of its energies to providing young people with media that will insulate their souls against the harsh, ungodly forces of Satan that threaten their spiritual safety. Consequently, we are pleased to release the 6th volume of episodes of our children’s program Digger Doug’s Underground. 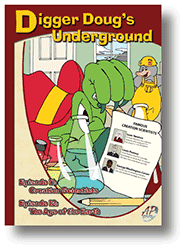 Like its predecessors, Volume 6 is packaged in an attractive and colorful DVD box and contains two episodes—Episode 11 titled “Creation Scientists” and Episode 12 titled “The Age of the Earth.”

In addition to airing regularly on the Gospel Broadcasting Network (www.gbntv.org), we continue to transfer episodes to DVD. The previous five volumes (10 episodes), already on the market, contain some outstanding information under the following episode titles: “What About the Big Bang?”, “After Their Kind,” “Dinosaurs and Artifacts,” “Dinosaurs and Natural History,” “Days of Creation,” “Biomimicry,” “Vestigial Organs,” “Cause and Effect,” “Similar Things,” and “Evolutionary Hoaxes.”

In addition to providing children with a masterful blending of scientific and biblical information, the episodes include original songs written specifically for the program. If you are a parent or grandparent, I know you will be delighted with these episodes if you will take the time to preview them.