Creation vs. Evolution Dinosaurs In The News
From Issue: R&R – April 2010

Marco Polo lived during the 13th and 14th centuries A.D. He was originally from Venice, but he, his father, and his uncle travelled extensively to the Far East. His book, The Travels of Marco Polo, document much of his exploration into the regions of China, Persia, Tibet, and Burma (Polo, 1961, preface). Polo spent much of his book detailing the interesting customs of different ethnic groups he encountered. He also focused on the different animals and plants associated with these tribes.

In chapter 49, Polo related items of interest found in a province named Karajan. He reported that large quantities of gold were found in the rivers. He further noted that the citizens used cowrie shells as currency. He then described some of the animals associated with the area. He wrote:

Here are found snakes and huge serpents, ten paces in length and ten spans in girth [that is, 50 feet long and 100 inches in girth]. At the fore part, near the head, they have two short legs, each with three claws, as well as eyes larger than a loaf and very glaring. The jaws are wide enough to swallow a man, the teeth are large and sharp, and their whole appearance is so formidable that neither man, nor any kind of animal can approach them without terror. Others are of smaller size, being eight, six, or five paces long (1961, pp. 158-159). 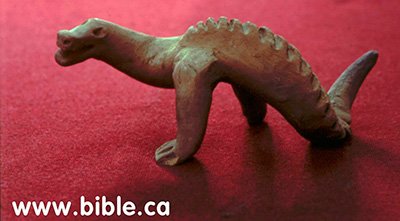 Polo continued his chapter by explaining how the local citizens of the area hunted and killed the creatures. He noted that the creatures were nocturnal (assisted by “eyes larger than a loaf”), dwelling in “caverns” during the day to avoid the heat. After the creatures killed their prey, Polo wrote that they would find a water source such as a lake, spring, or river. The serpents’ massive bodies left “deep impressions” in their paths “as if a heavy beam had been drawn along the sands” (p. 159). The creatures followed these same rutted paths regularly. Since their route was predictable, the natives buried large “wooden stakes tipped with sharp iron spikes, which they cover with sand” (p. 159). Polo reported that these spikes so severely wounded the creatures that they died quickly.

The 21st-century reader cannot help but be captivated by several items of interest in Polo’s account. First, his account of these creatures sounds remarkably like many dragon legends that circulated in the Far East. Yet Polo relates his information without any embellished mythologizing. His description is exactly what a person would expect from a traveler who had seen such a creature, and who had discussed its habits with the natives. In short, Polo matter-of-factly described an actual creature living during his time that modern people would certainly call a dragon.

The idea that Polo actually saw a huge serpent, with two legs near

the front of its body, that matches a description of a dragon perfectly, does not sit well with many modern scholars. In fact, in the Signet Classics edition of Polo’s writings, an editor’s note in the text says that these creatures were crocodiles. Immediately following the description of the two front legs, an asterisk in the text takes the reader to another editor’s note that states: “Strangely, Polo seems not to have noted the other two legs possessed by all fully equipped crocodiles” (p. 159). Supposedly, according to the editor, Polo described the length and bulk of the creature, noted the front legs and mentioned exactly how many claws were on them, described the face and teeth in remarkable detail, but simply forgot to mention the two back legs! Furthermore, crocodiles have five claws on their front legs, not three.

There are several reasons why many modern minds want to reject the idea that only a few hundred years ago, humans interacted with reptiles that match descriptions of dragons. One of the most powerful reasons is the fact that many of these “dragon” descriptions perfectly match the anatomy of well-known dinosaurs that scientists claim died out millions of years ago. Eric Lyons has done a masterful job of connecting dinosaurs to dragons, using many of the evolutionists own admissions (Lyons, 2007). Furthermore, Polo’s description of these reptiles matches ancient artifacts in collections, such as the Julsrud collection, that unmistakably contain well-known dinosaur representations (see Butt, 2008).

If God made all land-living animals on day six of Creation, along with the first 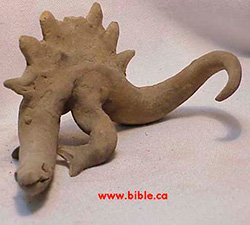 human pair, then we would expect to find ancient stories and art that connect humans and dinosaurs living at the same time. There is no need to explain away descriptions, like Polo’s, of creatures that sound like dragons and dinosaurs. If evolution is true, however, there is no reasonable explanation for the dragon legends that span the globe and the centuries. All ancient depictions and descriptions must be altered, distorted, or reworded to avoid the idea that humans and dragons/dinosaur-like reptiles coexisted. When the facts are taken at face value, an honest observer is forced to conclude that humans lived on the Earth with huge reptiles that are now extinct. The ancients often called them dragons. We call them dinosaurs.