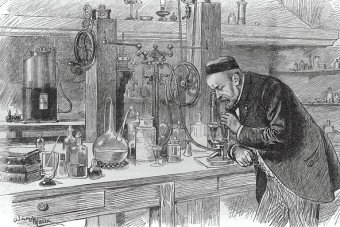 Louis Pasteur in his laboratory, looking through a microscope

One scientist who believed in God became so famous that his name appears on almost every milk container. If you look at the paper carton or plastic jug of milk in your refrigerator, you will see the word “pasteurized.” This word comes from the last name of the scientist, Pasteur.

Louis Pasteur was trained in chemistry and physics, but perhaps is best known to us today as the “father of bacteriology.” He discovered that many of the diseases that affect humans and animals are the result of dangerous germs that invade the body. Dairy products (like the milk you drink) are heated to destroy the bad germs in them so you won’t get sick. The heating is called “pasteurization,” because Dr. Pasteur invented the procedure. He not only discovered many of the bacteria (the scientific name for some germs) that caused diseases, but also was responsible for developing vaccines to combat them. Have you ever heard of rabies (a disease that causes certain animals to go mad)? Or have you ever heard of diphtheria (an infection that can cause humans to get very sick and die)? Louis Pasteur helped invent vaccines for both of these terrible diseases. Today, most young children in America receive a shot of diphtheria vaccine to protect them against the disease.

Dr. Pasteur was a man who firmly believed in God, and who was not afraid to let others know of his belief, especially as he grew older. The more marvelous his discoveries, the more humble he became, because he knew that he was studying the things God created in nature. When people asked him about his faith, he told them that the more he learned from science, the stronger his faith in God became. An atheist of our generation, who also was a scientist, called Pasteur “one of the greatest scientists in history.” Indeed, he was a great scientist, with a great faith in God. We need more boys and girls, and men and women, who, like Dr. Pasteur, are not ashamed to stand up and be counted for God!