Living in Tents in Bible Times

Have mom and dad ever let you set up a tent in the backyard so you could “camp out” over night? Or maybe you’ve gone camping with your family in a national park. I suspect that you really enjoyed the experience. There’s something magical about living and sleeping outside—even if you do not have all the conveniences of home.

The Bible is filled with references to people living in tents. In fact, the first reference to tent life involves a man named Jabal who was “the father of such as dwell in tents” (Genesis 4:20). The patriarchs Abraham, Isaac, and Jacob all lived most of their lives in tents, in and around the land of Canaan (Hebrews 11:9). The Israelites lived in tents during their 40 years in the wilderness. In fact, God wanted each tribe to pitch its tents around the main tent of the nation—the Tabernacle (which is just the normal Hebrew word for “tent”). 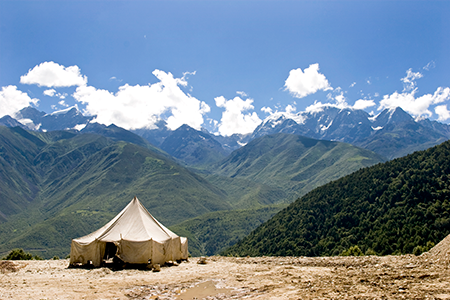 Tents were made of animal skins (usually from goats). Unlike our nylon “pup tents” and other flimsy tents made for modern camping, the tents of ancient times were much stronger, larger (more like circus tents!), and contained multiple rooms. These separate apartments were divided from each other by goat hair curtains. The women and children, as well as servants, could have their own living areas. Though separated by curtains, Sarah could hear what was being said in the reception apartment of Abraham’s tent (Genesis 18:10-15). It took several tents to care for the large family of Jacob, including maidservants (Genesis 31:33).

Israelite soldiers lived in tents when encamped for battle (2 Samuel 11:11). When the tribes gathered together at places like Gilgal and Shiloh, they undoubtedly brought their tents with them. After the permanent temple was built at Jerusalem, the people would make their annual pilgrimages there to celebrate the feasts commanded in the Law. Many thousands of Jews would sleep in tents on the mountains surrounding the city.

One fascinating feature of tents is the quickness and ease with which they can be set up or taken down. When taken down, the tenants are left without covering in the lonely desert. In like manner, Paul said our physical bodies will soon be dismantled and we will need a brand new resurrection body so we can live with God in heaven (2 Corinthians 5:1)!