Life is in the Blood!

Medical science has come a long way. Did you know that at one time, doctors thought that when you get sick, it is because you have an imbalance of “humors” in your body? This thinking can be traced as far back as the ancient Greek and Roman physicians and philosophers. Hippocrates, and later, Galen, thought that every person has a balance in their body between four humors: black bile, yellow bile, phlegm, and blood. If a person had too little or too much of one of the humors, he would get sick, according to these men.

Doctors came up with different methods of balancing the humors. These included making a person throw up, or causing him to sweat or urinate. Another very common method of getting rid of a harmful surplus of a humor was to “bleed” a person. The doctor would slice into a person’s vein to allow some blood to flow out, or he could use a syringe to withdraw some blood, or he could even use leeches to suck some of the blood out of the person. 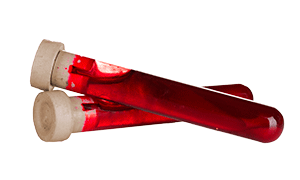 In 1799, the first president and “Father” of our country, George Washington, developed a throat infection after being out in cold weather. The doctors who tended to him used bleeding as one of their treatments. They removed some 80 ounces of blood—about 35% of all the blood in his body. Such practices were standard medical practice well into the 1800s.

Now that medical understanding has advanced a great deal, physicians know that a person’s life is closely connected to the condition of the blood, especially the amount of it. One of the first things paramedics do at the scene of an accident is to insert an IV into a person’s arm to bolster his or her blood. That is why, when you get sick and go to the doctor, besides taking your temperature and blood pressure, the nurse usually draws blood from your arm. They can do tests on your blood to determine your illness. The blood is literally the key to your life! Without it, your organs would not receive the oxygen and nutrients they need which are transported by blood.

No wonder in Leviticus 17:11, God told Moses, “For the life of the flesh is in the blood.” Can you believe it? Nearly 3,500 years before medical science figured it out, the great Creator explained to the Israelites that physical life is in the blood. But that’s not all: the key to spiritual life is in the blood as well. Peter explained that when we become a Christian, we are redeemed “with the precious blood of Christ” (1 Peter 1:19). Thank God for blood!