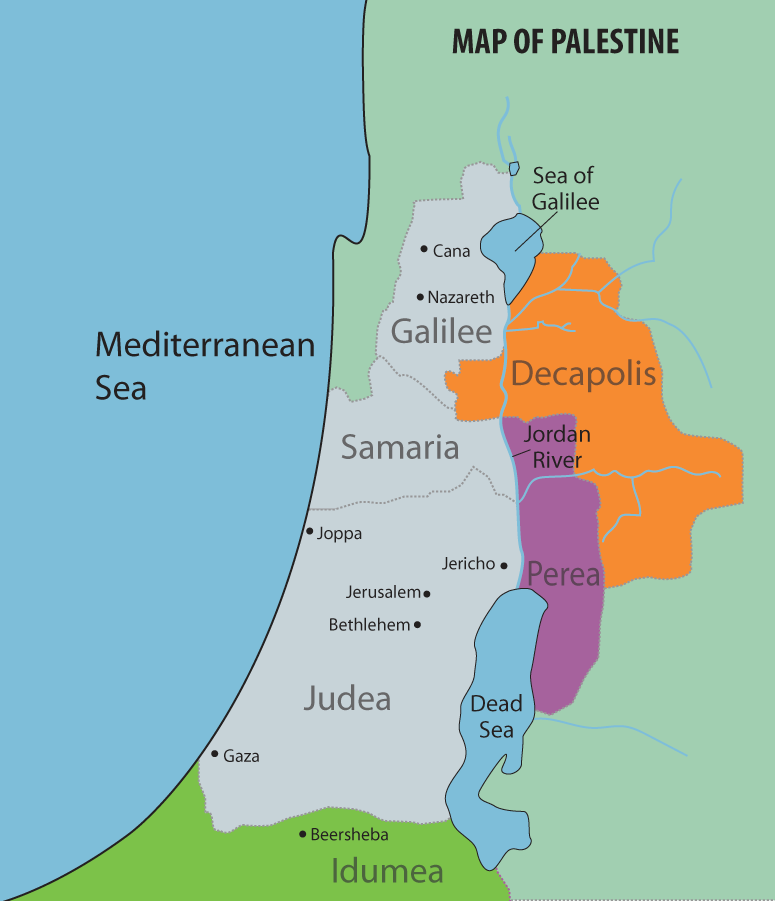 Judea, Samaria, and Galilee were, by far, the most well-known regions of Palestine. These regions, all of which were on the west side of the Jordan River, are specifically mentioned by name over 100 times (combined) in the New Testament. There were, however, lesser-known regions that we need to be aware of in order to better understand the New Testament.

Idumea was the region located south of Judea (Mark 3:5). Although this name may seem unfamiliar, the people who lived there should be very well known to you (if you remember much about the Old Testament). Idumea is simply the Greek name for the land of Edom. Recall that the Edomites were the descendents of Esau, the son of Isaac and brother of Jacob.

The New Testament writers referred to one important region in the time of Christ on the east side of the Jordan simply as the land “beyond the Jordan” (Matthew 4:25). More officially, first-century historians, such as Josephus, called this land “Perea.” It was in this land that John, the forerunner of Christ, lived and baptized. The region of Perea extended east to west from the deserts to the Jordan River, and north to south from about the Yarmuk to the Arnon rivers. Many prejudiced Jews valued the region of Perea as it allowed them to travel between Judea and Galilee without going through the despised region of Samaria.

Another region on the east side of the Jordan was known as Decapolis (meaning “ten cities”). This region is mentioned three times in the New Testament and was located north of Perea. Mark records that a man whom Jesus had healed of demon possession “began to proclaim in Decapolis all that Jesus had done for him” (5:20).

Isn’t it amazing that Jesus, the greatest Man Who ever set foot on Earth, spent nearly all of His life in only a few, relatively small, regions in Palestine? Yet, within only a few years after His death and resurrection, His story was being spread to hundreds of millions of people around the world.