Komodo Dragons take a Bite out of Evolution

Creation vs. Evolution Design in Animals
From Issue: Discovery 2/1/2012 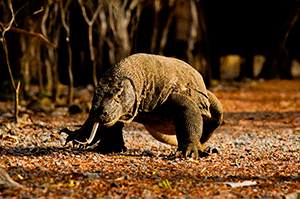 Komodo dragons live in Indonesia on the islands of Komodo and Flores, as well as a few other nearby islands.These reptiles are the heaviest living lizards in the world. They can reach 10 feet in length and weigh over 250 pounds. They have thick skin, powerful legs, lashing tails, tough toes, and sharp claws. Such physical characteristics allow komodos to kill animals that are several times their size, including water buffaloes.

Komodo dragons do not breathe fire, but they do have an eerie forked tongue and a vicious bite. Komodos have very sharp teeth—a total of 60—that they use to tear their prey apart. They can swallow large pieces of flesh at a time. In only a few minutes a 100-pound Komodo can eat 80 pounds of meat. 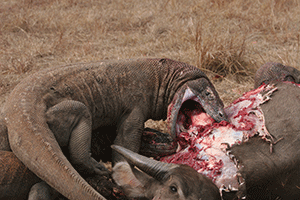 Unlike humans, Komodos do not mind leftover pieces of food in their teeth. In fact, these leftover food particles promote the growth of deadly bacteria in the Komodo’s mouth. Why would any Komodo want deadly bacteria living in its mouth? When a Komodo bites its prey, often times just once, those bacteria cause an infection in the prey, making the bite deadly. The bacteria begin to sicken and weaken the prey, eventually killing it in a few days. Amazingly, the bacteria do not harm the Komodo. 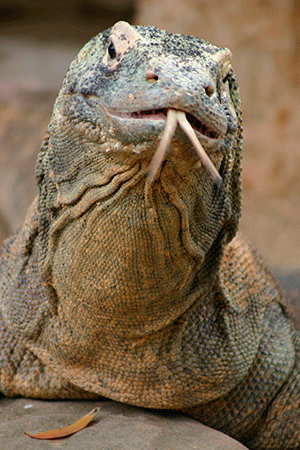 Evolution cannot logically explain the existence of this amazing animal. Why do the bacteria harm the Komodo’s prey, but not the Komodo itself? How could the Komodo have evolved the ability to carry deadly bacteria in its mouth without first killing itself? If evolution is true, why did the first Komodo not die from these deadly bacteria before producing offspring? The bacteria-filled bite of the Komodo is a puzzle for those who think these animals evolved from earlier reptiles, which could not have survived with such bacteria growing in their mouths. Creationists, however, realize that Komodos came from the Creator on day six of Creation (Genesis 1:24-25).

God designed Komodo dragons with the ability to use their tongue to capture scent molecules in the air. Remarkably, these animals can smell the flesh of a wounded or dead animal 2½ miles away.