Is the Papacy a Divine Institution?

George H. Bush said of him: “When you are in his presence you say to yourself: ‘Here is a great man, a great leader.’ He is a man of liberty, of faith, who suffers every time the Church, or man, is oppressed. He will occupy, with all authority, a privileged position in the history of our time. I am not Catholic, but towards him I feel a deeply profound respect and a sincere affection” (quoted in Mirás, n.d.).

Of whom was the former President of the United States speaking? He was referring to the late Karol Wojtyla, commonly known as Pope John Paul II. Having been considered the “successor of the apostle Peter” for 26 years, and the alleged heir of an endless hierarchical legacy, John Paul II influenced the hearts of many Catholics, as well as many other religious people. He was a representative of the monopolized throne of the Catholic Church—the papacy.

What is the papacy? Is there scriptural basis for this Catholic institution? Did God designate a legacy of “ecclesiastical leaders” on Earth? Apart from what people may think concerning this institution or its members, and apart from any eulogies, blessings, insults, or condemnations that religious people may offer concerning this ecclesiastical order, we must open the pages of the Bible, as well as the pages of history, to analyze whether the papacy (with its long list of members) is a divine institution, or simply a human invention that is unworthy of the religious honor bestowed upon it.

THE ALLEGED BIBLICAL BASIS FOR THE PAPACY

The papacy is an ecclesiastic system in which the pope (considered as the successor of the apostle Peter) oversees the government of the Catholic Church as its universal “head” (see Joyce, 1999). Although people may disagree with the basis for the papacy, the truth is that this ecclesiastical order does exist, and thus its existence needs to be explained. Since Catholicism teaches that the basis for the establishment of the papacy is divine and biblical, we must turn to the Bible to verify or refute this teaching.

Jesus said in Matthew 16:18, “And I also say to you that you are Peter, and on this rock I will build My church, and the gates of Hades shall not prevail against it.” This is the Bible verse to which the Catholic apologist quickly turns in order to defend the establishment of the papacy. Through an arbitrary interpretation of this verse—an interpretation which suggests that Jesus chose Peter, and ultimately his successors, to be the “rock” (foundation) upon which the church would be built—the Catholic Church has built a grand structure with a mere man as its head. But what did Jesus mean in this verse recorded by Matthew? Was He establishing a human hierarchy over the church? Was Jesus declaring that Peter was the “rock” of the church?

Before analyzing this passage, please think about it logically. From the reading of this verse, would anyone, without any preconceived religious idea, understand that Jesus was granting the title of “pope” to Peter? Would anyone arrive at the conclusion that a successive papacy was being established? In fact, absent any Catholic influence, the answer would be an emphatic “No!”

Matthew 16:18 relates an incident that took place in Caesarea Philippi, when the Lord asked His disciples, “Who do men say that I, the Son of Man, am?” (Matthew 16:13). The disciples answered by reciting the various popular opinions about Jesus’ identity. Then, Jesus, making the question more personal, asked His own disciples: “But who do you say that I am?” (Matthew 16:15, emp. added). To this second question, only the impulsive Peter dared to answer, “You are the Christ, the Son of the living God” (Matthew 16:16). Due to his response, Jesus addressed Peter with the declaration, “Upon this rock I will build my church” (16:18). Consequently, Jesus’ statement in Matthew 16:18 is connected exclusively to Peter’s confession concerning Christ’s deity and not to a future pontificate.

We must also examine the difference between two Greek words used in the text: “You are Peter (petros) and upon this rock (petra) I will build My church” (Matthew 16:18). In reference to Peter, the Holy Spirit recorded the Greek word petros—“a detached stone or boulder, or a stone that might be thrown or easily moved” (Vine, 1966, 3:302). In contrast, in reference to the “rock,” the Holy Spirit recorded the Greek word petra, which denotes a solid mass of rock (Vine, 3:302). Furthermore, these two words are in a different gender; the word petros is masculine, while the word petra is feminine (cf. Boles, 1952, pp. 344-345; Coffman, 1984, p. 248). Therefore, petros refers to the Aramaic name Jesus gave Peter (Cephas, John 1:42), while the word used for “rock” (petra) refers to the very foundation of the church, i.e., the truth that Jesus is the Son of God and the Messiah (cf. Matthew 16:16).

Although these two Greek words clearly show that Peter was neither the foundation nor the head of the church, it still is important to note what Peter himself said about the “rock.” Some Catholics, using their knowledge and speculations about the language of the text, will argue fervently that they understand, better than any other religious person, what Jesus was telling Peter. Nevertheless, if anyone could guarantee a proper understanding of Jesus’ message, it would have been Peter himself, who heard the words of Jesus firsthand.

In his first epistle, Peter, by divine inspiration, used the Greek word lithos to refer to Jesus: “Coming to Him as to a living stone (lithos), rejected indeed by men, but chosen by God and precious…. Therefore it is also contained in the Scripture, ‘Behold, I lay in Zion a chief cornerstone (lithos), elect, precious’…. ‘The stone (lithos) which the builders rejected has become the chief cornerstone’” (1 Peter 2:4-7). Then, in the following verse (2:8), the apostle interchangeably used lithos and petra—the same Greek word recorded in Matthew 16:18—when he described Jesus as “a stone (lithos) of stumbling and a rock (petra) of offense.” In Acts 4, Peter, speaking again by divine inspiration (vs. 8), said of Jesus: “This is the ‘stone (lithos) which was rejected by you builders, which has become the chief cornerstone’” (4:11). Without a doubt, Peter, more than any religious person of our modern times, conveyed the true meaning of the word used in Matthew 16:18.

We need to determine what the other apostles and early Christians believed concerning the “rock,” the foundation of the church. If Jesus referred to Peter as the “rock,” it is logical to think that this was the “truth” that those closest to Him understood and believed, and not the “truth” that some religious people “discovered” centuries later. The inspired apostle Paul told the Corinthians that the Israelites in the wilderness “all drank the same spiritual drink. For they drank of that spiritual Rock (petra) that followed them, and that Rock (petra) was Christ” (1 Corinthians 10:4). How much more clearly could it be stated? Since the Old Testament, the rock referred to Christ, not Peter. In Ephesians 2:20, Paul stated, “[H]aving been built on the foundation of the apostles and prophets, Jesus Christ Himself being the chief cornerstone…” (emp. added). By a study of these passages, it is obvious that the apostles and other Christians of the New Testament knew, believed, and taught that the “rock” referred to Christ, not Peter.

We also must consider Jesus’ teachings concerning the “rock.” In Luke 20:17 (following His parable of the wicked vinedressers), Jesus quoted the words of Psalm 118:22, as Peter did, which describe Him as “the living stone” (lithos). He went on to say, “Whoever falls on that stone (lithos) will be broken; but on whomever it falls, it will grind him to powder” (Luke 20:18; cf. Matthew 21:42,44; Mark 12:10). His comments were directed at the Jewish people, particularly the chief priests and scribes who showed disdain toward those sent by God, including the Messiah. These religious leaders knew “He was speaking of them” (Matthew 21:45), and understood that He was referring to Himself as the chief cornerstone that would crush any who disbelieved in Him.

If Jesus prophetically said, “Upon this rock I will build my church” (Matthew 16:18, emp. added), we would expect to find this prophecy’s fulfillment. The biblical evidence shows that the “rock” refers to Peter’s confession of Jesus’ deity, and by extension, to Jesus Himself. Jesus promised that He would build His church on the foundation of Who He is, “the Christ, the Son of the living God,” as described by Peter in Matthew 16:16. In fact, the realization that Jesus was the Son of God and the Messiah was the striking truth that compelled 3,000 people to believe in Jesus, repent, and be baptized to be part of the church of the Lord (Acts 2:36-47). In Jerusalem, on the Day of Pentecost, only 50 days after His resurrection, Christ fulfilled His prophecy that “upon this rock” (i.e., the fact that Jesus is God and the Messiah; Matthew 16:16; cf. Acts 2:22-36) He would build His church. On that memorable day, Peter stood before the crowds not to declare himself as the first “pope” of the church, or as the “father” of all believers. Rather, he stood humbly to give honor and acknowledge the deity of the One Who made the church a reality.

There is no biblical basis on which to defend the papacy. To adopt a rock (i.e., a foundation) other than that which is already laid, is to build upon a man-made foundation, which is unstable and one day will collapse. To accept a foundation other than Christ, is to usurp His God-given role as the Head of the church which He bought with His own blood (Acts 20:28). Paul wrote, “For no other foundation can anyone lay than that which is laid, which is Jesus Christ” (1 Corinthians 3:11, emp. added). 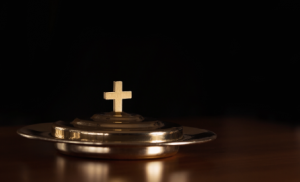