Is it true that chimpanzees are 99% human?

For many years, evolutionists claimed that chimpanzees and humans were so similar that they could be considered “kissing cousins.” Those same evolutionists were quick to point out that the DNA (the genetic material inside a living cell) in humans was almost an identical match to the DNA found in monkeys. In fact, up until 2002, almost any textbook you opened, reported that humans and chimpanzees were 99% genetically similar. But today, scientists are finding more and more differences in DNA from humans and apes.  For instance, a 2002 research study showed that human DNA was about 4-5% different from chimpanzees—and that number will probably continue to grow as we learn all of the details about human DNA. 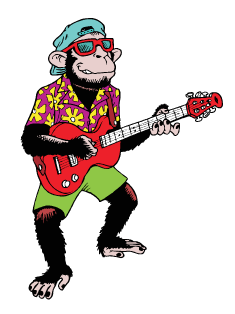 Does it make sense that humans share so much DNA with chimpanzees and apes (as well as many other animals)? Well, consider that both humans and chimps are mammals, and possess the same type of internal organs. Humans and chimps both eat fruits and vegetables, which means their mouths and digestive systems have to share some similar characteristics. Both humans and chimps get sensory information from their eyes, ears, noses, and fingers. So yes, it would make sense that their DNA has a lot of similarities. But so do many other animals—like moles, for instance! This explains why humans and moles also share a great deal of DNA!

However, there is also a great deal of difference between chimps and humans. Have you ever heard a chimpanzee talk, sing a song, or write a poem? Do chimpanzees build large buildings or computers? Do chimpanzees wear clothes and tennis shoes? Both humans and chimpanzees have hair, but chimps have it all over their bodies. Also, the skin of chimpanzees comes in only one color, while human skin color comes in a wide variety of yellows, browns, whites, and reds. And how many chimpanzees do you know that worship God?

The truth is, if we took all of the DNA from every cell, and then compared the DNA in monkeys and humans, the 4-5% difference in DNA would represent approximately 200 million differences in your body, compared to that of an ape! To help make this number understandable, consider the fact that if evolutionists had to pay you one penny for every one of those differences, you would walk away with $2,000,000. Given those proportions, 4-5% does not appear so small, does it? Man is the only creature that is made in the image and likeness of God. Chimpanzees are simply animals whose bodies share some similarities with man’s body.