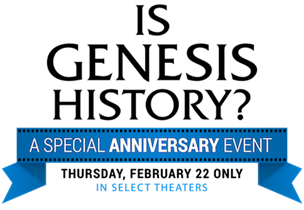 Did you get the opportunity to see “Is Genesis History?” last year when it came out briefly in theaters? Whether you did or not, you will have another opportunity to support the film on Thursday (February 22nd). The film will be played in select cinemas once again, as a special one-year anniversary event. What is the film about? Below are my comments about the film from last year, which are still relevant:

What if the Bible’s teachings about Creation, the Flood, and a young Earth—what we teach at Apologetics Press—could be released in hundreds of movie theaters nationwide, in an extremely professional, modern video production, and presented in an eloquent way by the leading Creation field scientists? Would such a movie be worth supporting?

We wholeheartedly believe so. To our knowledge, never before in history has the truth of Creation, the Flood, and a young Earth been presented in such a sweeping venue and in such an impressive way—a way that has the potential to give credibility to the biblical view of origins in the minds of millions of Americans who have heard little about the truth. Most, of course, have only heard the “other side,” while being told that the Creation/Flood model is unscientific, evidence-less, and riddled with error.

By the grace of God, I have had the opportunity over the last few years to work in the field and attend conferences with several of the scientists who were interviewed in the film to see firsthand the legitimacy of their work. We at AP had the opportunity to preview the film…and offer thoughts and suggestions (many of which were implemented in the film). Although the film (like Fireproof, Courageous, etc.) was not produced by churches of Christ (with whom we are affiliated), very little within the film would we find objectionable. If there was ever a movie Christians should support in movie theaters, in our opinion, this is it!

Mark your calendars for this Thursday and save a little spending money to go support this extremely timely and worthwhile film. Send a message to movie producers and the evolutionary community that the Creation model is not an antiquated, hokey view held by a small number of irrelevant, negligible, fringe radicals, but a valid, powerful, competitive alternative (to mainstream naturalistic science), which squares with the evidence and, hence, should be given attention in science classrooms and textbooks.

Keep in mind that tickets are limited! Get yours today. For more information, visit: https://isgenesishistory.com/anniversary/.