How Did Judas Die?

Alleged contradictions Inspiration of the Bible
From Issue: Discovery 5/1/2016

Of all the Bible questions we receive at Apologetics Press, perhaps the most frequently asked is, “How exactly did Judas die?” According to Matthew, after Judas betrayed Jesus, Judas “went and hanged himself” (27:5). In the book of Acts, however, Luke mentioned that “falling headlong, he burst open in the middle and all his entrails gushed out” (1:18). So which is it? Did Judas hang himself, or did he fall headlong and burst his mid-section open?

The truth is, Matthew 27:5 and Acts 1:18 cannot contradict each other if it is possible for both to be true—and it certainly is possible for both incidents to have occurred. Consider a brawl in which two men are fighting to the death. The larger man strikes the undersized man in the throat, crushing his larynx. For nearly 60 seconds, the wounded man stumbles around trying to breathe, but cannot. He then goes limp, falls to the ground, and strikes his head on the concrete and dies. When the police come to the scene and ask witnesses what happened, one person will likely declare, “James struck John and killed him.” Another person may say, “John suffocated after being hit in the throat.” Still another might add, “Falling headfirst, John hit his head on the ground, causing his skull to split open.” Are the witnesses’ statements contradictory? No. They are supplementary. (Remember reading about “additions” earlier in this Discoveryissue?) Likewise, neither of the statements concerning the death of Judas is contradictory. Simply put, one does not exclude the other and they may both be true. 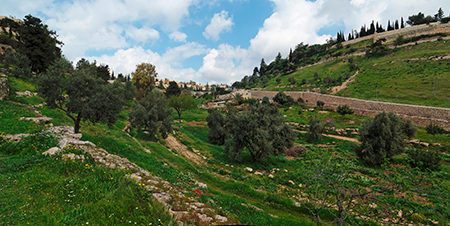 According to ancient tradition, Judas hanged himself above the Valley of Hinnom on the edge of a cliff. Eventually the rope snapped (or was cut or untied), which caused the lifeless body of Judas to fall headfirst into the field below, as Luke described. Matthew does not deny that Judas fell and had his entrails gush out, and Luke does not deny that Judas hanged himself. In short, Matthew records the method in which Judas attempted his death, while Luke reports the end result.