While many people throughout history have made their dwelling places in caves or tents, more permanent, man-made houses of various kinds have been widely used as well. Lot and his family lived in a house in Sodom. The Israelites lived in different kinds of houses in Egypt and Canaan. The apostle Paul once rented a house in Rome for two years.

The houses mentioned in Bible times were quite different than what we are used to seeing in America. Although there were some houses with multiple rooms, one-room houses were very common. For the average person, houses were not built with the intention of remaining inside for many hours at a time throughout each day. Instead, people “lived” outside (working, playing, and sometimes eating), while the house was largely what they used for storage and where they went to sleep. [Remember when Jesus told the parable of the friend at midnight (Luke 11:5-8) and mentioned the father who had children with him in bed? It appears this set-up was a necessity in a one-room house, where a kind of pallet was rolled onto the floor for all family members to sleep on, side by side.]

Many houses in Bible times (just like some today around the world) had as their flooring packed dirt or small chips of rocks. House walls were often made of sun-dried mud bricks. Where was all of the wood you might ask? Why not wood flooring and walls? For the general population, wood was too precious and expensive to use in much of the house. What little wood that could be found in the houses of the common man in Bible times was in the roofing (in the form of beams), and often in the door and doorposts.

You don’t see many roofs in America like the ones in Bible times. Roofs then were often made of reeds, straw, and perhaps various bushes, which were covered with mud or clay. Sand or small rock pebbles were then sprinkled on top of the earthen roof. Most would attempt to smooth out their roofs with a small roller of some kind in hopes of packing the tops of houses so that roofs would be easier to shed rain and less likely to leak.

The roofs of most houses in Bible times were fashioned in such a way that they could be broken and repaired fairly easily, at least in some places. Recall that once, when Jesus was preaching in a crowded house in Capernaum, a paralytic was brought to Him. Yet, since the house was so packed, those carrying the paralytic “could not come near Him.” Rather than give up, however, “they uncovered the roof where He [Jesus] was. So when they had broken through, they let down the bed on which the paralytic was lying” (Mark 2:4), and Jesus healed him.

In most one-room and multiple-room houses the roof top was a popular place. 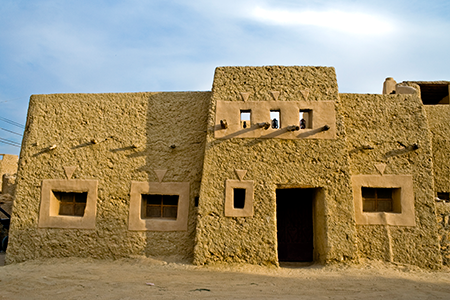 People in Bible times would often build rooms on their roofs. Some of these upper rooms were bigger than others, but many houses had them. Elijah once lived for a while in the upper room of a widow’s house (1 Kings 17:19). Peter raised Dorcas from the dead while in her upper room (Acts 9:37). And Jesus and His disciples ate the last Passover meal on the top of a gentleman’s house—in his upper room, which also served as his guest room (Mark 14:12-26).

Houses have been important to people around the world for thousands of years. They have served a number of important functions, not the least of which has been to shelter families from all sorts of potential physical harm. But the greatest house that you could ever consider is the spiritual house of God (1 Peter 2:5), which is “the church of the living God, the pillar and ground of the truth” (1 Timothy 3:15). Only in this “house”—God’s spiritual house—is there a promise of everlasting protection from sin and death.