For more than 70 years we have known that science textbooks which teach that horses evolved have been wrong. In fact, we have written about this in past Discovery issues. I was excited to see that the Natural History Museum now admits that the “evidence” once used to teach horse evolution has been  proven to be inaccurate. Of course, I hoped that the authors would be honest and admit that there is no real scientific evidence that horses evolved from any other kind of animal. I hoped that they would change from the false view of evolution to the correct view that God created horses and all other kinds of animals. Unfortunately, that is not what the writers of the new horse “evolution” exhibit did.

Instead, they admitted that “evidence” for horse evolution that was used in the past was wrong, but then they just presented more wrong information. The placard at the exhibit says, “Scientists concluded that there was no single line of evolution.” That means the material that showed horse evolution as a “single line” is all false. Then they stated, “This doesn’t mean that the original story was entirely wrong.” Actually, the story of horse evolution that is presented in the old textbooks as well as the new exhibit is all wrong. Horses never evolved from a different kind of animal. God created them on Day Six of Creation (Genesis 1:24-25). In the future, we will probably see another revision of horse “evolution.” It will not be due to the fact that new information has been discovered which shows how horses really evolved. Instead, it will be because horses never evolved and all of the information that supposedly proves it is wrong. 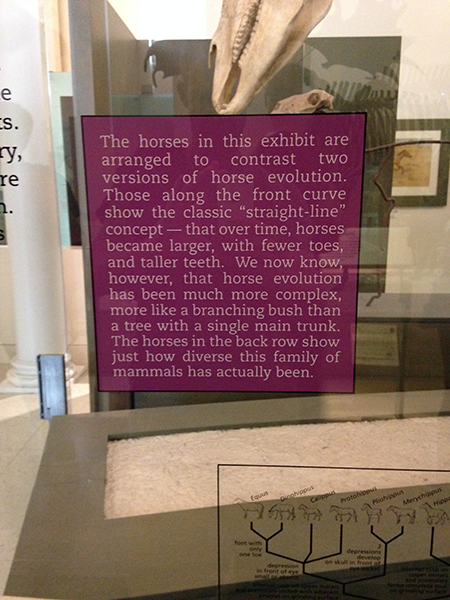 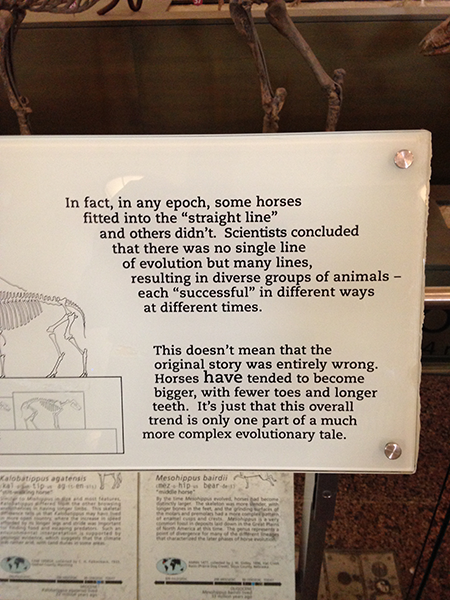