Orcas, or “killer whales” by which you probably know them, are some of the most fascinating creatures that God has designed. Interestingly enough, “killer whales” actually aren’t whales at all, but the largest members of the dolphin family. These “wolves of the sea,” as they are sometimes called, can grow up to 32 feet long, weigh in at nine tons, and eat up to 500 pounds of food per day! While they can be found in every ocean and many seas, they tend to stick to cold-water regions such as the coasts of Greenland, Iceland, Alaska, and Finland. A warm layer of blubber protects them from the frigid temperatures. If we can say anything about them, they certainly aren’t picky at dinnertime! While they usually prefer fish, they’ve been known to chow down on whales, seals, squid, turtles, and even seagulls.

They may be big, but they are also fast and fierce. Because they have no known natural predators, they are called “apex predators.” Don’t believe it? In 1997, a Great White shark attacked a mother orca and her calf off the coast of California. A couple hours later, the shark was, as they say, “swimming with the fishes” (that is, dead). On a good day, orcas can swim as far as 100 miles, and as fast as 30 miles per hour if they are under stress. 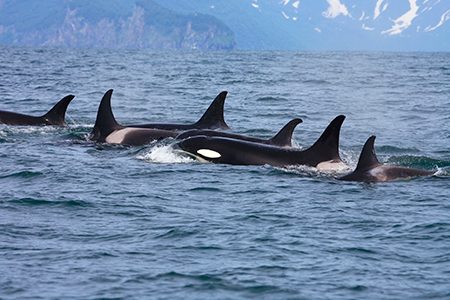 Have you ever heard the phrase, “all brawn and no brain”? This saying does not fit well with orcas. They are strong and smart! God gave them the second largest recorded brain of all ocean-dwelling mammals, weighing in at a gigantic 15 pounds. They have been sure to put their melons to good use, seen in their navigation and communication skills. Just like bats and dolphins, orcas are able to get around more efficiently by using “echolocation.” This sounds like a series of clicks. On the other hand, they are also very effective at communicating among their “pods,” or family groups. These sounds resemble whistles, pops, and claps.

Isn’t God’s creation truly amazing? The sleek beauty and unbridled power of the orca alone is enough to leave atheists “without excuse”  (Romans 1:20-21).